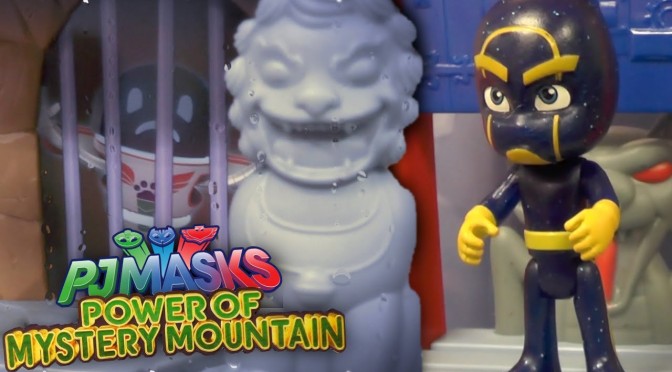 We check out the new Mystery Mountain figures for Catboy and Anyu. And the Power of Mystery Mountain collectible figure set, and the Catboy Quad, Owlette Quad and Gekko Quad. We also revisit the Seeker HQ. 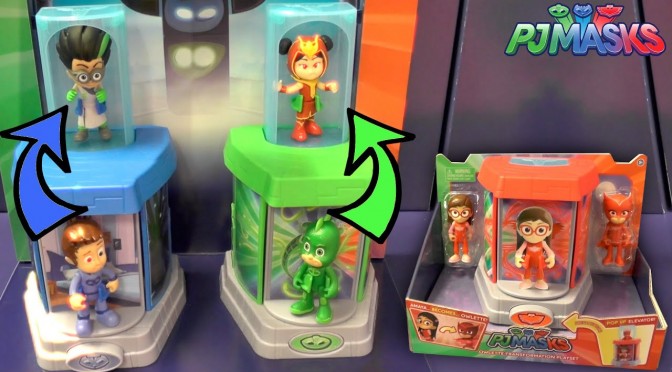 In the PJ Masks Episodes, we compare the new PJ Masks Transformation toys from the Disney Junior show. You get them for Gekko, Owlette and Catboy, but they can transform into anything. 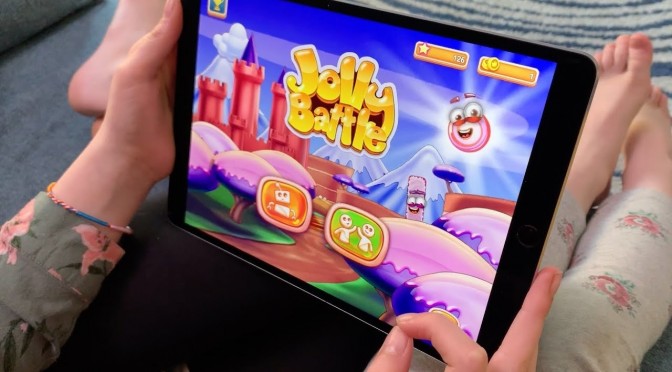 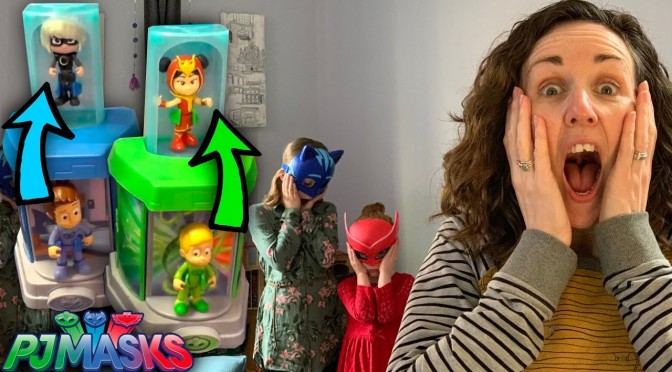 In this PJ Masks episodes we have a look at the New PJ Masks Toys for Toy Fair. Owlette whistles to get Catboy and Gekko’s attention but then sneaks into the PJ Masks toy room on her own. 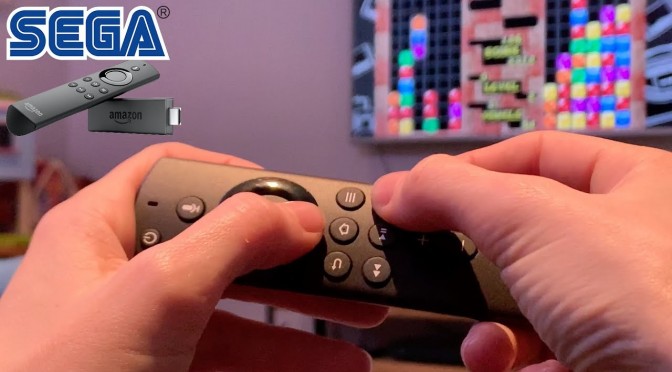 We worked with Amazon to test out the Sega Classics game on the Amazon Fire TV Stick.
More information: http://lrd.to/HGuakJzC82

Full list of games:
Sonic The Hedgehog – Remastered – Blaze by in a blur using the Super Sonic Spin Attack. Loop the loop by defying gravity and even spin around in a 360° rotating maze.
Sonic The Hedgehog 2 – Remastered – Sonic’s back and better than ever with his new fabulous friend Miles “Tails” Prower!
Sonic CD – Remastered – Hard action, stunning graphics, and mean music make this Sonic’s toughest challenge ever!
Sonic Spinball – Sonic spins into pinball pandemonium! Strap on your Power Sneakers for all new Sonic moves!
The Revenge of Shinobi – You are Musashi, master ninja. Now you must destroy the vicious army of Neo Zeed!
Streets of Rage – The city’s a war zone, and ex-cops Axel, Adam, and Blaze are going out two at a time to give the gangs a kick in the guts.
Streets of Rage 2 – Skull-crushing ex-wrestler Max Thunder and new thrasher Skate join original rumblers Axel and Blaze to take on the streets!
Streets of Rage 3 – Fight your way through eight white-knuckle levels to decide the final outcome with new characters, new moves, and a new challenge!
Altered Beast – Infiltrate the Underworld with the power to transform into mythical creatures with supernatural strength.
Golden Axe – Battle invaders on the back of a giant turtle. Fight on the feathered wings of a soaring eagle. Conquer and ride flame-spewing monsters to victory!
Golden Axe II – Kick, hack, and hurl away enemies in the struggle to recapture that legendary symbol of peace, the Golden Axe.
Golden Axe III – Chaos is spreading across the land once again as the Prince of Darkness arises to conquer the world.
Comix Zone – Play as Sketch Turner, a street-wise comic book artist who gets trapped in the comic book world of his own creation.
Ristar – Ristar is his solar system’s last hope to restore peace to seven once happy worlds and free his father from evil space pirate Greedy!
Beyond Oasis – Ali must unleash the powers of four Wild Spirits to stop the resurrection of a ruthless sorcerer and save the empire!
Decap Attack – You’re Chuck D. Head, and you’re beheaded for a bone-chilling adventure against all manner of ghouls, goblins, and creepy creations!
ESWAT: City Under Siege – Be the ultimate crimebuster as you work your way up to become an awesome supercop – more machine than man!
Gunstar Heroes – The peaceful planet of Gunstar 9 has been invaded, but two brothers vow to destroy the evil power that threatens it.
Dynamite Headdy – Hot-headed Headdy gets into some real head-banging to thwart the Dark Demon’s devious deeds.
Dr Robotnik’s Mean Bean Machine – Unite four beans of the same colour so they can stick together and escape the evil Dr. Robotnik’s grasp!
Columns – Tinker with your riches to align glittering jewels across, down, or diagonally.
Bio-Hazard Battle – Command Plasma Rings, Implosion Pods, and Seeker Lasers to blast mutoids into oblivion!
Alien Storm – Shape-changing aliens have taken over your city. Fry the slimy horrors and smash their bid for global conquest!
Bonanza Bros. – Mike and Spike Bonanza, burglars for hire, will stop any wiseguys making your life miserable.
Gain Ground – It’s up to three brave fighters to rescue hostages and destroy the central computer of a system gone haywire.

Amazon sponsored this editorial independent video including providing access to the game and the hardware. 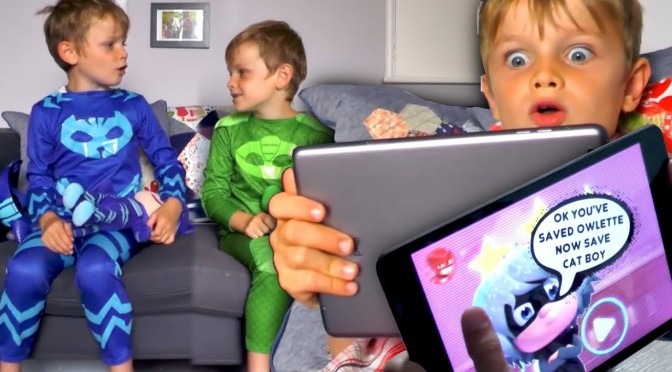 In our PJ Masks episode Luna Girl turns the PJ Masks Toys Metal and then steals the iPad. Catboy, Owlette and Gekko have to beat the PJ Masks game to free the toys. 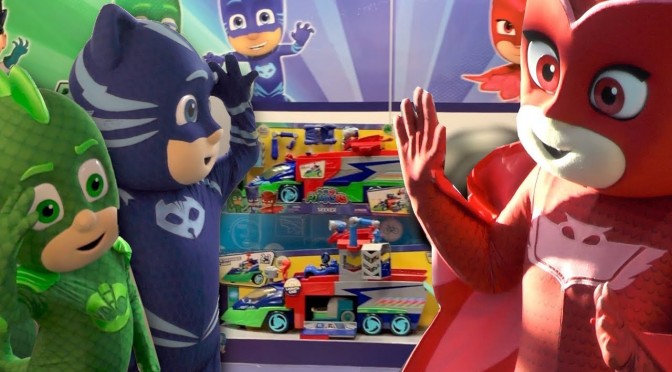 In this PJ Masks episodes (Disney Junior show) Owlette gets fed up of being at the back when Gekko and Catboy won’t let her past. She gets her own back by getting to the toy room first and locking the door. 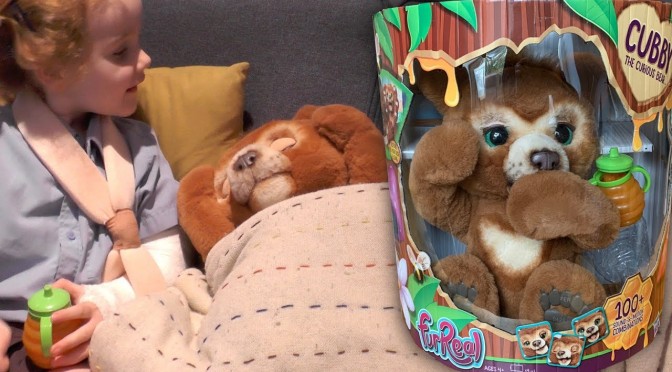 Hasbro lent us Furreal Cubby to play with. He made this little girl happy after she broke her arm.

furReal Cubby, the Curious Bear Interactive Plush Toy is a dream companion for kids– one who’ll excitedly take part in all their adventures, and snuggle next to them at the end of the day. Cubby is a curious young cub and is eager to be picked up and held (he hugs you back!), play peek-a-boo, and even dance from time to time. And let’s not forget snack time! Feed him his bottle or treat and he’ll make eating sounds. He’s a chatty little bear, too – he babbles back when he’s spoken to. In nighttime mode, this cutie closes his eyes, makes sleepy sounds, and plays one of four 5-minute sequences of soft music. Sweet dreams, Cubby! With moving eyes, nose, and mouth, his face is delightfully expressive – making him a totally loveable cub! Requires 4 x 1.5 v C batteries. Available at most major toy retailers. 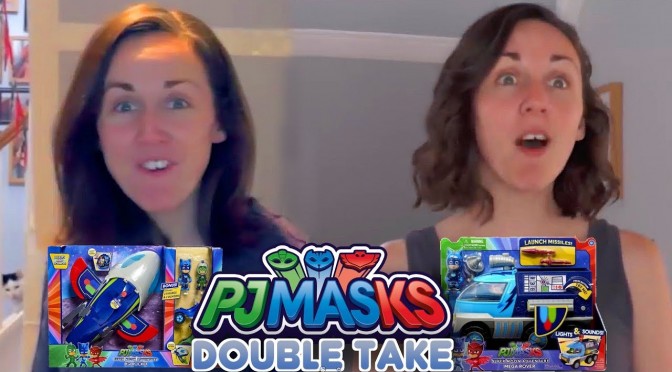 We double the fun with two PJ Masks videos in one. Super Moon Adventure Mega Rover, PJ Masks Rocket HQ. But this PJ Masks episodes has twice the trouble for Owlette, Catboy and Gekko. Luna Girl, Romeo and the Wolfies Rip, Howler and Kevin 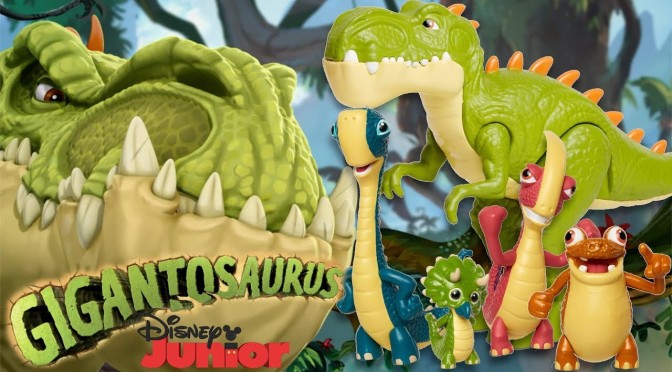 Like PJ Masks this is inspired from a children’s book, also called Gigantosaurus. Unlike PJ Masks, it features Dinosaurs of all shapes and sizes though.

We have a clip from one of the first Gigantosaurus Episodes that will be aired on the Disney Channel on 18th January.

We see Rocky, Bill, Tiny, and Mazu the four Dino-kids in the show. And have a sneak peek at the toys for each of them coming from Jakks Pacific.