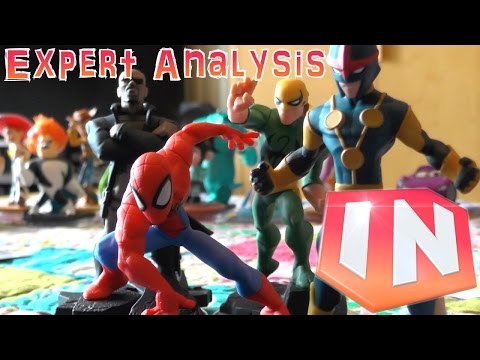 We get a Marvel fan to take a close look at the Spider-Man Playset for Disney Infinity 2.0.

Mark takes a look at the first trailer for the Spider-Man Play Set, coming soon for Disney Infinity, discussing the characters and story possibilities Disney are introducing into the game.

This expansion sees the Venom symbiote being cloned and set loose in New York, taking over New Yorkers in a similar manner to the spider virus from the recent Spider-Island storyline in the comics. You might remember the Venom from the film Spider-Man 3, and he’s cloned by Norman Osborn, the Green Goblin, Spider-Man’s nemesis.

We also get a look at other classic Spider-Man villains, with Mysterio assisting the Green Goblin and Doctor Octopus arguing with him.

New York seems to be a major part of this update, and the city is a major character in the Spider-Man comics, but we do get a look at some more cosmic settings too.

There’s also allies for Spider-Man in the form of Nick Fury, Iron Fist and Nova. They’re an interesting set of characters with different abilities and combat styles. The trailer also gives us a couple of moments of Spidey’s trademark wit, so this should be a fun update.