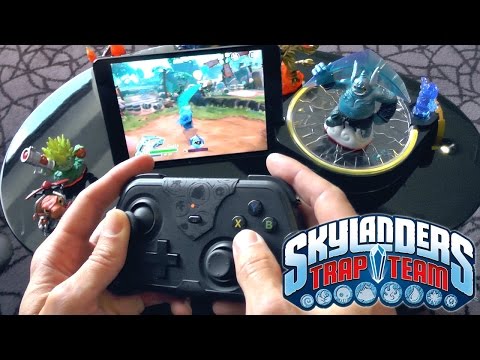 In this video we take a look at some of the mobile game-play to find out whether it holds up graphically and if there are any new secrets inside.

Skylanders Trap Team is launching on tablet devices alongside the console launch, replicating the the full console experience, with every Skylander released to date supported within the game.

The tablet version can be played on the go with touch based virtual controls, but it really comes into it’s own when combined with a Bluetooth enabled Traptanium Portal and Control Pad.

The first thing you’ll notice is that the graphics and game-play look almost identical to the HD console counterparts, but digging a little deeper, it seems there are also some new features in here too.

Hot Switching Villains! In previous footage, we’ve seen how you must disable enemies before you are prompted to trap them. At that point a magic moment occurs as the villain is transported from the screen, along with their voice, into the trap. However, in this version of the game, we can see that once an enemy is disabled, you can hot switch to them mid game, apparently without the need to go through the trapping process.

Along with this hot-switching ability, we get to see a whole host of Skylanders and Villains, along with a selection of new upgrade abilities. Featured in the video are: