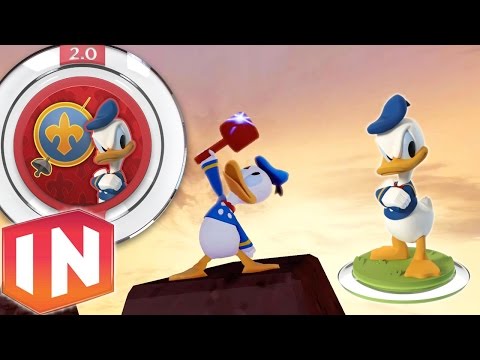 The latest character announcement for Disney Infinity 2.0 comes in the form of a classic Disney character, Donald Duck.

Our fowl feathered friend shows all the attitude you might expect in his final pose, looking right at home alongside Sorcerer’s Apprentice Mickey.

The addition of Donald takes the number of Disney Originals announced to seven, with Maleficent, Merida, Stitch, Tinker Bell and the recently announced Jasmine and Aladdin also available in 2015.

Donald appears to have a number of ways to deal with the foes he might come across in the Toy Box or the all new Toy Box Games. Initially in the video we seem him armed with a mallet, but he also appears to have the ability to conjure up a variety of objects, from an old boot to a watermelon, to throw at anyone who may cross his path.

If you get bored on Donald’s regular sailor suit, the new Musketeer Costume Power Disc allows you to make Donald a little more combat ready, as he arms himself with a rapier and dons the famous outfit from The Three Musketeers animated movie. He’s not all about duels and derring-do though and we expect the funny side of Donald to be a big draw for Disney Infinity 2.0, but remember he can only be used in the Toy Box.