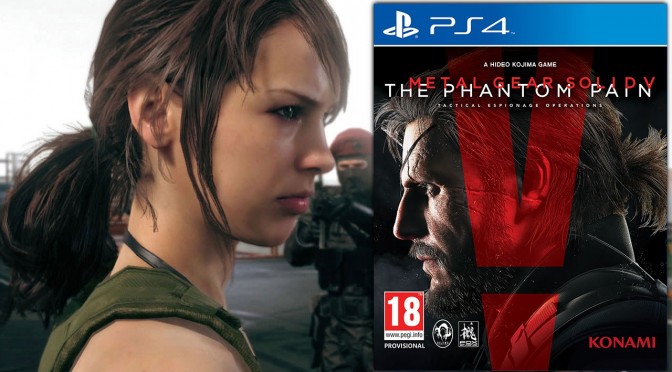 The protagonist travels through 1980s Afghanistan and can choose to enact his revenge-based goals through combat or stealth methods, though the latter is more encouraged. He has access to a range of tools, vehicles, and AI companions, all of which can be upgraded with money collected throughout the game. His base, where he can develop further tech, can also be upgraded.

Multiplayer modes are due later this year.

Other recent games that offer stealth approaches include the Dishonored and Assassin’s Creed series.

2. Story
Despite being the second part of the fifth entry in the Metal Gear Solid series, The Phantom Pain is set 21 years before the original Metal Gear Solid, in 1984. The protagonist is Big Boss, codenamed “Punished Snake” and “Venom Snake”, who has been in a coma for nine years since the events of the prologue to Metal Gear Solid V, Ground Zeroes. In The Phantom Pain he leads a mercenary group into Afghanistan during the Soviet-Afghan War on a quest for revenge.

5. Duration and Difficulty
It’ll take most players at least 30 hours to complete The Phantom Pain, if not much longer. Some players may also replay missions to try approaching them in a different way.

Difficulty varies according to what approaches and items the player uses, but The Phantom Pain is a generally challenging game.

6. UK Rating
In the UK and Europe, PEGI rates Metal Gear Solid V: The Phantom Pain as only suitable for those aged 18 and older for “extreme violence”, “multiple, motiveless killing”, “violence towards defenceless people”, and “strong language”.
http://www.pegi.info/en/index/global_id/505/?searchString=metal+gear+solid+v&agecategories=&genre=&organisations=&platforms=&countries=&submit=Search#searchresults

The GRA expands on its PEGI rating by highlighting the “frequent moderate to strong violence including scenes of torture and some strong language throughout”. The stronger violence “includes multiple civilians and those considered to be vulnerable or defenceless being executed in cold blood, scenes of torture involving the use of jump cables, and a graphic scene of a young woman reopening a wound on her abdomen and plunging her hand into her own viscera”. Language includes the “f” word, and there’s also a scene with implied imminent sexual assault.
http://gamesratingauthority.org/GRA/

“Firefights are highlighted by realistic gunfire, slow-motion effects, and large blood-splatter effects. Players have the ability to kill non-adversary characters, though this may negatively affect players’ progress; child soldiers appear in some sequences, though fatal shots to these enemies result in mission failure.

Cutscenes include intense acts of violence and/or instances of gore: patients gunned down in a hospital; a character’s exposed intestines; torture/interrogation scenes (e.g., a man’s leg bent backwards; a character stabbed in the teeth with a knife; a woman strangled and drowned by a soldier; a character electrocuted with rods).

During the course of the game some female characters wear revealing outfits that expose large amounts of cleavage; camera angles sometimes focus and linger on a character’s buttocks and cleavage. One sequence depicts a female character showering (with a bikini top and bottom) inside a cage as male characters watch. The words “f**k” and “sh*t” are heard in the dialogue.

8. Themes
One of the female characters, Quiet, has a very sexualised appearance, which some may feel undermines her character for the sake of appealing to certain players.

The game touches on a lot of themes like revenge, torture, and even child soldiers.

9. Why people play:
Because of the open world and multiple ways to approach missions, players enjoy setting their own pace and style, making plans and carrying them out, and maybe changing their approach if things don’t go as expected. The Metal Gear Solid games are perhaps most well known for their complicated plots, which even long-time fans of the series can find overwhelming, and The Phantom Pain continues that tradition. But overall, the game is expansive and mechanically interesting enough to appeal even to those who haven’t played Metal Gear Solid before.