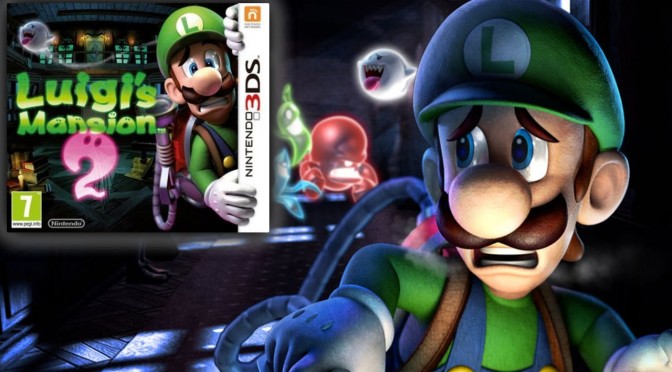 Luigi’s Mansion Dark Moon is an exploration and puzzle game. Through a series of missions, you control Luigi, who is equipped with the Poltergust 5000, a specialised vacuum cleaner used to capture ghosts.

Through beautifully drawn 3D rooms and chambers players guide Luigi and push, pull and open furniture to find ghosts, money and the hidden gems. The vacuum adds further interactions both to capture ghosts as well as reveal hidden objects.

The main mode has you retrieving pieces of the shattered Dark Moon by seeking them out in the five haunted mansions locations.

There is a cooperative multiplayer mode that can be played locally or online via Nintendo Network. This offers a download play option so multiple people can play with one copy of the game.

King Boo has escaped and shattered the Dark Moon crystal causing the ghosts to become hostile. Professor E Gadd, sheltering in a bunker, recruits Luigi to find the five pieces of the Dark Moon, which have been scattered to different mansions.

Luigi’s Mansion Dark Moon was developed by Next Level Games and published by Nintendo.

Luigi’s Mansion Dark Moon retailed at £39.99, but can now be found at a reduced price.

Luigi’s Mansion Dark Moon is a substantial game on the handheld, feeling more like a console title in both game-play and duration. It should take around 20 hours to finish the main campaign while the multi-player will extend play-time considerably as will collecting every hidden object.

In the UK and Europe, PEGI rates Luigi’s Mansion Dark Moon as suitable for persons aged 7 years and over only. It contains pictures or sounds likely to be scary to young children

In the US, the ESRB rates Luigi’s Mansion Dark Moon as suitable for those 10 and over. “Players can fire seeds at plant creatures, set off “cartoony” explosions, and shoot spiked balls at enemies; characters whoop or squeal in a whimsical manner when they take damage. One sequence depicts a large monster that emits flatulent sounds and balls of slime at Luigi.

Luigi’s Mansion Dark Moon plays to its horror theme well without becoming overly dark. There are creepy overtones throughout but this is more a Sunday matinee style scares than anything physiologically disturbing.

9. Why people play:
Luigi’s Mansion Dark Moon is a superbly produced handheld game that easily matches many full console experiences. Not only is the central mechanic well implemented, it also develops intelligently as the game progresses.

Small touches like the flash of Luigi’s torch, the original DS styled communicated, and even Luigi’s nervous whistling while he creeps around the hunted mansions give the game a sense of finesse. Each level is like a fresh world in miniature to explore and conquer. The amount of hidden content will have players returning to completed locations time and time again.

For both younger players, adventure game fans or played together in a family Luigi’s Mansion is like peering into a beautifully sculpted diorama and discovering you can walk around in it.