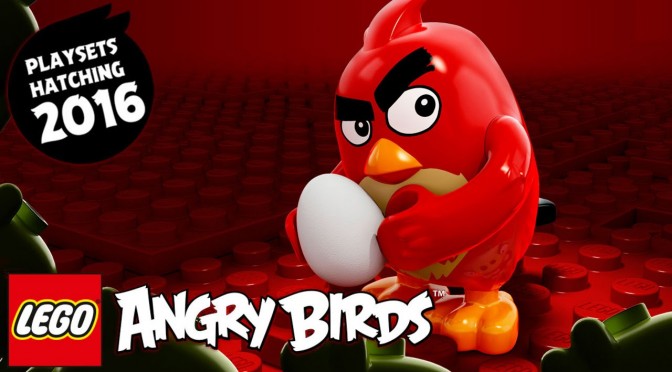 Rovio, makers of the popular Angry Birds games had previously announced a partnership with The LEGO Group to develop a line of construction toys. LEGO Angry Birds are to be available in spring 2016 to coincide with the release of The Angry Birds Movie.

However at the time we didn’t have sight of any actual Lego bricks to illustrate what this may look like in practice. Today there has appeared online a poster for the upcoming Lego sets featuring Red holding an egg, stood on a pile of the iconic studded Lego bricks.

While this doesn’t give a huge amount away it does indicate a willingness on Lego’s part to stray from the usual mini-figure design. The Angry Birds in Lego form look like a good fit for the characters from the game and movie, but less like traditional Lego characters. Of course other franchises have led this drift into more unique sculpts — take The Simpsons for example.

Seeing the Angry Birds in Lego form does also raise the question of whether their transit may be completed by them appearing in a Lego video-game. Perhaps even Lego Dimensions. This may seem far fetched but then so did the inclusion of Portal and Doctor Who before they were confirmed.