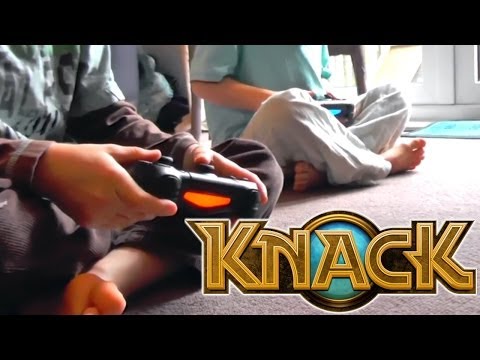 We get two brothers to review Knack and take a close look at the co-op aspects of the game. What is often derided as being too hard for younger players turned out to be an almost perfect match for their (6 and 8 year old) abilities.

Add to this the assistance co-op mode and the ability to use the Vita as a second controller and you are well on the way to understanding this classic family launch title on the PlayStation 4.

But more than the functionality and visuals of the game it is the investment in story-telling that really made the boys sit up and take notice. The game achieves a weighty tone simply not seen in similar platform action experiences for young audiences — even the Lego games rarely stray into this more emotional territory, preferring instead the safety of slap stick tomfoolery.

While many have criticised the game for not delivering the experience they expected, being too hard and not lasting long enough, this is to misunderstand what Japan Studios have created here.
This is not unlike the slow reception to Uncharted around the PlayStation 3 launch. It took gamers a while to realise just what they had on their hands. I still remember initial criticisms for Drake’s monkey-like climbing compared to Assassin’s Creed. Of course Uncharted is now the darling of all, it will be interesting to see how Knack fares — I suggest it will grow to be recognized as a stand out family favourite.