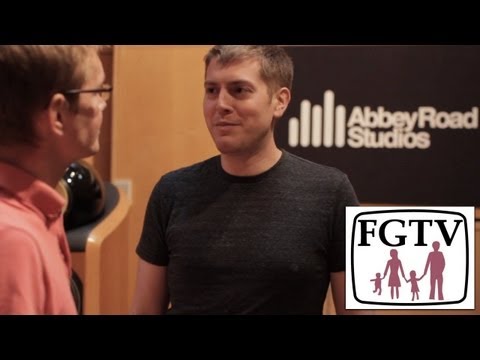 We have a sneak peak at Fantasia: Music Evolved, the newly announced dance game from Disney & Harmonix for Xbox One and 360 Kinect. John Drake, director at Harmonix, talked us through a hands on session with the game at Abbey Road Studios. He described how its latest game took beat-matching game-play in a new direction exclusively for Kinect and Xbox One. “Our games previously have been about authenticity and simulation. Detection is what makes those games special, better dance games than Just Dance. In this game it’s a little less about prescription or didactic choreography. You gesture to the screen and can use either hand to control things. The choices you are making are reflecting in the visuals and the audio.”

Rather than particular dance moves, in Fantasia you follow direction gestures and motions. This may sound a little casual for core dance- gamers but Drake was keen to underline that Fantasia still has a big focus on “specificity in the timing. It is still beat-match gameplay and about hitting the notes that are on the screen at the time you need to hit them. The difference here is the expressivity and intentionality is much greater.”

Spending some time playing the game the experience is immediately engaging. As someone who struggled to execute moves in Dance Central, I was happily surprised by how accessible and entertaining Fantasia: Music Evolved was to play. At the same time though, there was a lot of skill and accuracy required to chain together the game’s score multipliers and achieve a respectable total.

In addition to the beat-matching you can also make choices about different instrumentations. Perform well and you are rewarded with access to the in-song musical manipulator. This means you can apply various effects to the sound of the track — wah-wah pedal and lead guitar riffs were two examples I tried.

This rhythm section of the game is married to world exploration sections where you can traverse different fantastical environments, interact with characters and objects and even create your own music from scratch.

It’s here that we really see the Fantasia: Music Evolved aspect of the game come to the fore. Yen Sid, the master sorcerer of Fantasia movie (and of Kingdom Hearts fame) brings you into the world. These discovery realms slowly offer more interactions and spaces as you complete different songs. They each draw on imagery from the Fantasia film while at the same time rending this in a style that is their own.

Playing a couple of these areas, even in unfinished form they were visually impressive and worked well interactively. You can move left and right by simply side stepping in front of the Xbox camera, then interact using the classic Kinect arm pointing gesture. Here though, as in the rhythm segments, Harmonix make more use of depth perception (z-axis as they called it in my demo) so you can push your hand forward to reach into the space. It’s an interesting development that makes the interaction feel more nuanced and perhaps reflects their higher game-play goals with the Xbox One camera.

The variety of paths through these songs coupled with the explore-able worlds suggests there will be many hours of gameplay on offer here.

Total play time is not locked down by obviously substantial with 25 songs in addition to the world exploration to keep you entertained. Fantasia: Music Evolved is scheduled for a 2014 release that puts it as an Xbox One “launch window” release. It will also be available for Xbox 360.