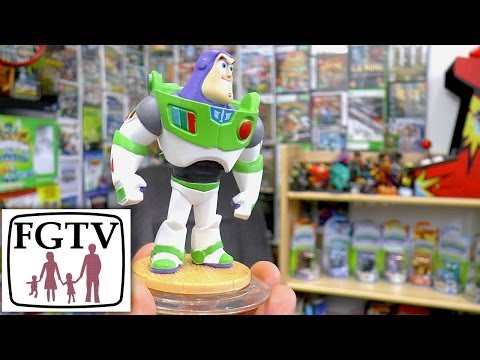 We take our first look at the Toy Story Disney Infinity toys along with a close up on fresh footage of the game-play. Check back for our full review of the new adventure.

Official Blurb:
“Disney Interactive today released additional details and assets for the Toy Story in Space Play Set for Disney Infinity. This is the first Play Set to be released since the game launch in August and invites gamers to take on the role of space rangers Buzz Lightyear, Jessie or Woody as they try to help relocate the Pizza Planet Aliens to a new world.

The Toy Story in Space Play Set will be available in the UK from Friday 25th October at all participating retailers. The new asset release includes character images, action screenshots and a gameplay trailer featuring both Play Set and Toy Box modes of Toy Story in Space.

Key highlights include:
– Play Set: The Toy Story in Space Play Set is the sixth Play Set to be released for Disney Infinity and features Buzz Lightyear and Jessie in the pack, with Woody sold separately. Players will have the ability to defend the new colony and friends by unlocking new Space Ranger equipment. The Toy Story in Space Play Set introduces hover packs, jetpacks, laser blasters, goo blasters, new mounts and more into the Toy Box mode.
– Toy Box mode: Buzz Lightyear, Jessie and Woody are able to interact with a vast array of Disney and Pixar characters from movies including Monsters University, Pirates of the Caribbean, The Incredibles, Cars and The Lone Ranger to create new and exciting adventures in customized worlds.