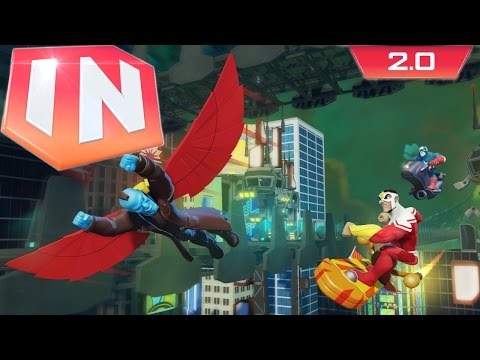 Disney Interactive have announced two new characters for Disney Infinity 2.0, and they’ll be familiar to anyone who has been to see this year’s Marvel movies – The Falcon and Yondu.

These are two breakout characters who should make popular characters in-game and great figurines for your shelf. In these newly released pics we see these two great characters battling Frost Giants.

Falcon was a big part of Captain America: The Winter Soldier, played by Antony Mackie, but the Infinity version more closely resembles the comic book Falcon with his bright red and white costume than the more militaristic movie incarnation. His wings are hard light rather than mechanical, and other characters can use them too when you place the Falcon’s Wings Power Disc on the Disney Infinity base.

Yondu, part of the Guardians of the Galaxy Play Set, very closely resembles the movie version played by Michael Rooker in Guardians of the Galaxy, rather than the goofier cosmic archer in the comics. Yondu is a fun, quite mean character and he looks great in his long coat and mohawk-like strip on his head. Placing the Yondu power disc on the Disney Infinity base will allow you to use Yondu as a powerful ally, using his whistle-controlled arrow.

Disney Infinity 2.0: Marvel Super Heroes is out 19 September, while Yondu will be available next year.