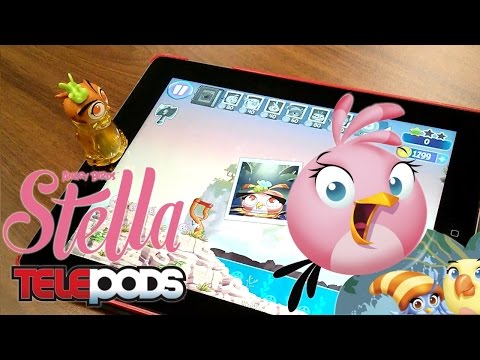 The figures and playsets that accompany the launch of Angry Birds Stella are designed to encourage physical play beyond the usual flinging of birds at pigs. They’re customisable with different outfits and the playsets focus around interesting locations rather than action. After getting our hands on them, it becomes clear that Rovio’s comments about Stella appealing to both genders is built on ever so slightly shaky ground, as the sets are clearly coloured to fit in the traditional female gendered sections of toy stores.

However, colour choices and packaging aside, my son’s immediate reaction to seeing them was one of desire. The designs are far more interesting than some of the previous Angry Birds toys and the swing slingshot is a nice change. The characters themselves seem to be made to a higher quality level that before and look very elegant perched snugly atop one of the telepods. The ability to customise (aka dress up) each character also increases the interest level from my kids when it comes to playing with them outside of the game. If only the Angry Birds Star Wars characters had detachable light sabers!

When transported into the game, these physical versions of the characters have a slightly different appearance to their digital equivalents, maintaining their individualized appearance. For example, the figure (Dahlia) that we use in the video has a green bug perched atop her head and that is replicated in the game, but absent from the digital figure. It’s these touches that help foster that feeling within the player that you’re really transporting the character into the game, rather than just reusing the digital version.