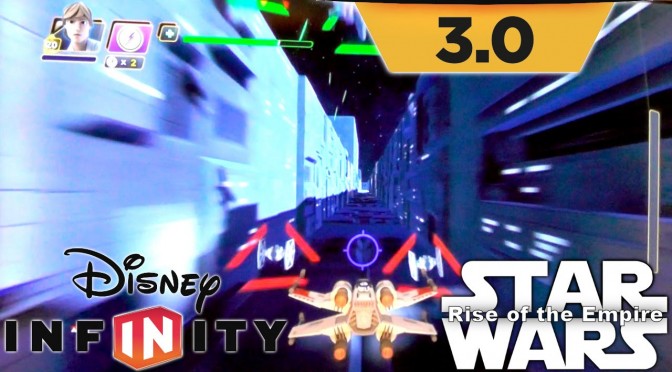 We have an in depth look at game-play for the Rise of the Empire play-set from Studio Gobo. Disney Infinity 3.0 introduces a number of Star Wars playsets and characters for fans to experience. For the parents out there, the most popular of these may prove to be Star Wars: Rise of the Empire, which lets players relive epic moments from the original trilogy of films. Luke Skywalker and Princess Leia figures come bundled with the playset, while Han Solo and Chewbacca will be available to buy separately.

One of the most popular elements of the Rise of the Empire playset is sure to be the vehicle based combat, featuring iconic space craft from the franchise. Players will be able to take control of an X-Wing during the Battle of Yavin as the Rebel Alliance attack the Death Star; or jump into a Snow Speeder to protect the Rebel base on Hoth from an AT AT assault. Whatever the level, co-op is fully supported, but if you’d prefer some ground based combat, why not ditch the Snow Speeder and take control of an AT AT directly, what could be more fun than that?

Outside of the movie moments, fans of the Toy Box can dive into the Tatooine Toy Box Hub, expanding the well known hive a villainy with their own customisations. Place a Hanger in the town, watch it constructed before your very eyes, then one button press later and you’re taking a Sky Hopper for ride around the world. Of course you can always swap the Sky Hopper for a Land Speeder, Bantha or even the Millennium Falcon. The customisations don’t end there though, as Costume Power Discs return in Disney Infinity 3.0, with an X-Wing Pilot and Bounty Hunter Infiltration costumes available for Luke and Leia.