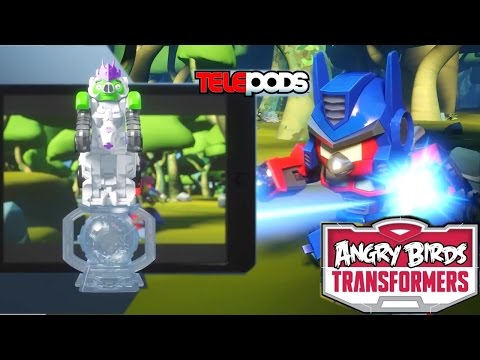 After the reveal of some of the Toys R Us exclusive Angry Birds Transformers Telepods figures last week, Rovio have just released the first non-gameplay gameplay trailer. In this CGI trailer we get to see Optimus Prime Bird facing up to some strange new types of transformers on a remote island. Unable to get the job done himself, he calls in help from an old foe by way of a Telepod. Megatron Pig then joins the fray to fight side-by-side with Optimus Bird as they try to take down a large transforming piece of the island.

While the trailer is marked “not actual gameplay” it does give us some indication that the robot forms and combat may play a larger part in the game than we originally thought. With the as yet unseen Battle Packs that will be available at launch, this does indeed suggest we’re going to get a far more complex game than Angry Birds Go’s pure kart racing formula. The original press release suggests it’ll be Autobird vs Deceptihog, but this trailer suggests there may be room for some team up action too. Will the game will feature multiplayer, as Angry Birds Go does, perhaps even co-op?