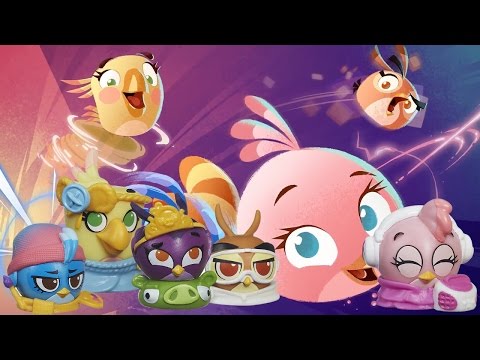 We’re full speed ahead with news from San Diego Comic Con now as Rovio release a trailer for the second of their big upcoming releases for 2014, Angry Birds Stella. The trailer focusses squarely on the characters, giving us a sense of what each of the flock’s personality is all about.

Luca appears to be the oddball of the bunch; Dhalia is a talented chemist; Poppy brings a musical element to the group, while Willow is definitely more at home with a paintbrush in her hand. Together with the force of nature that is Stella, they bring the fight to the evil piggy forces of the Queen Gale.

Along with the launch of the trailer, Toys R Us have recently added listings for the playsets that will be available around the time the game hits app stores worldwide:

The Birds Rock Together Collection includes all 5 bird figures to launch at the cardboard piggies. Just launch one of your birds at the included piggy with the launcher. The first player to knock the last piggy down wins!

Knock the pesky piggies away to get in and play with the Tree House Playset Game! Just put your piggies on their perches and launch one of your birds at them with the launcher. The tree house doors pop open when the piggies fall from their perches, and then you can move in with all your fun accessories!

Knock the pesky piggies away to get in and play with the Piggy Palace Playset Game! Just put your piggy in his perch in the palace, and launch one of your birds at the included piggy with the launcher. The palace doors pop open when the pig falls from his perch, and then you can move in with all your fun accessories!

Did you catch our other Stella videos?