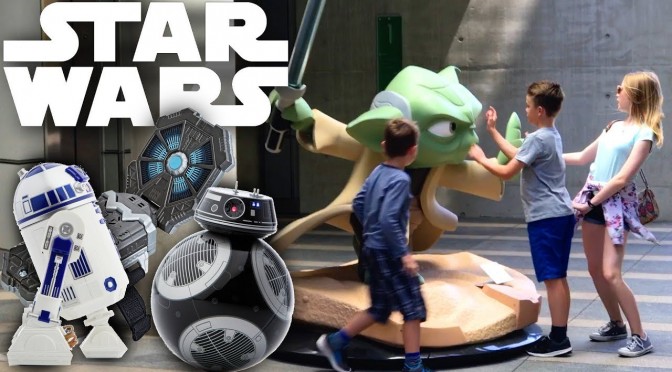 We head off to Hollywood and get a sneak peek at the new toys:
– Sphero R2-D2 and BB-9E App-Enabled Droids
This year Sphero are back with a new spherical droid, BB-9E and a beautiful version of R2-D2. Both of these toys are app controlled and also allow you to explore holographic simulations, and Star Wars galaxies.
– Star Wars Force Link
The Force Link system is wearable tech for children that integrates lights, sounds and motion across a range of 30 Force Link Hasbro toys.
Once you have the Force Link starter set on your arm, simply holding the related figures and space ships triggers a range of sounds, phrases, and lights.
– Star Wars: Jedi Challenges Augmented Reality Experience
Star Wars: Jedi Challenges us augmented reality that works with your smartphone slotted into a Lenovo Mirage AR headset. We had a go recently and were impressed how reliable the experience was and how easy it was to setup.
It offers a range of challenges that are engaged with via the Lightsaber and moving around the room. The features we know about include Lightsaber Battles with Kylo Ren and Darth Vader.
Then there’s strategy combat battling the forces of the Republic, Rebel Alliance, and Resistance against the might of the Separatists, Empire, and First Order. Finally, and most exciting for fans of the films is Holochess.
Disney provided access to toys and accommodation.