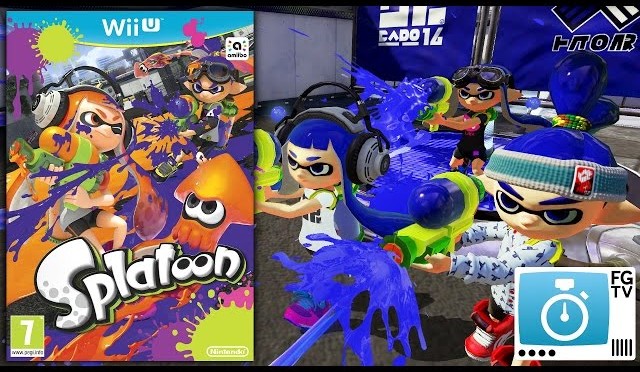 Family guide to Splatoon on the Wii U.

1. Genre
Splatoon is a shooting game, viewed from over the shoulder of each hero, in which players control Inklings, creatures that can switch between human and squid forms. In their human forms, the Inklings can shoot coloured ink onto the level. In their squid forms, the Inklings can travel through ink of their own team’s colour. The goal is to have covered more of the world in your own colour of ink than your opponent.

Splatoon supports three amiibo – Inkling Girl, Inkling Boy, and Inkling Squid – each of which comes with a set of missions, equipment, and a bonus mini-game. Although simple to begin with, the game evolves: players can choose from different types of weapons, and add on special attacks and equipment.

2. Story
The single-player campaign has players making their way through levels that feature some platforming and puzzle-solving, as well as battling enemies called Octarians.

3. Developer
Splatoon was developed by Nintendo.

4. Format
Splatoon is only available for the Wii U.

5. Duration and Difficulty
Because of the focus on multiplayer, Splatoon is highly replayable.

Despite the use of a shooting mechanic, Splatoon should be easy enough for even very young players to play.

6. UK Rating
In the UK and Europe, PEGI rates Splatoon as only appropriate for those aged 7 and older for violence and online play.
http://www.pegi.info/en/index/global_id/505/?searchString=splatoon

PEGI expanded on the rating by saying it was due to the “colourful child friendly setting and non-realistic looking violence”, “not specifically due to the type of weapons”. The reason the game was rated PEGI 7 and not PEGI 3 was because of “disturbing elements such as the frenetic violence and some of the boss type characters”, though nothing that “would warrant a PEGI fear descriptor at the 7 level”. Though the violence is towards human-like characters, it’s “of a different nature than the violence aimed at humans we see in the PEGI 12 category”.

7. Other Ratings
ESRB rates this as E for Everyone 10+ stating that “this is a third-person shooter set in a “cartoony” fantasy land called Inkopolis. Players assume the role of squid-like creatures traversing through stages using paint guns, ink bombs, inkzookas, and paint rollers to attack enemy tentacles and boss creatures.”

8. Themes
While Splatoon does focus on online multiplayer, there’s no voice chat, so even young players should be able to play online safely without parents having to worry about what they might hear.

9. Why people play
Splatoon takes a mechanic usually reserved for mature-themed games, shooting, and makes a game that’s appropriate and fun for even very young players. Along with the shooting the real focus is covering the floor and walls with the most ink. The current winner is clear because their ink colour dominates. While Splatoon is competitive, it’s also colourful and charming, providing the kind of family fun Nintendo is known for.