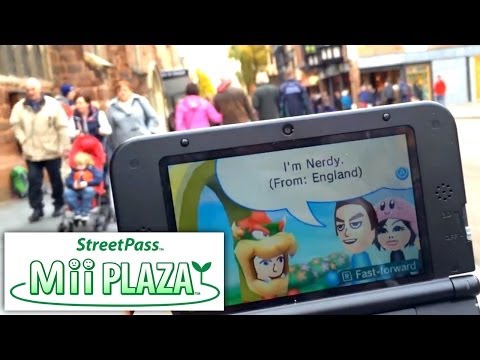 We take our 3DS XL on the streets to work through the different Street Pass games, one of the most popular aspects of the system in my family.

When deciding which console is right for your family it’s important to understand all the different features. While the platform exclusive games are relatively self-evident with a bit of research, less obvious are the built in functions.
The 3DS, 3DS XL and 2DS each work in the same way. They have camera, picture, web browsing, note taking and a couple of augmented reality games available right out of the box. But for my family the biggest attraction of the 3DS is the built in Street Pass feature. Although this was much touted at launch you may have not realised how much fun this offers and how it has evolved.
The basic premise is that by taking your 3DS, 3DS XL or 2DS out and about you can exchange data with other handhelds by simply passing in the street. Being Nintendo there is of course no personal information exchanged beyond a simple greeting, name, geographical region and your Mii avatar. However, details are shared about the games you are playing and this opens the door to all sorts of new ways to connect to a wider community of players.
If you pass someone else who has played the same game as you, and they have enabled the Street Pass function, then you will find a note on your 3DS that offers a fresh challenge the next time you play the game. This may be rewards or battles in Street Fighter IV, ghost laps to beat in Mario Kart 7 or any number of other exchanges from the many games that use the feature.
Along with these there is also a Street Pass specific game built into the 3DS, Street Pass Mii Plaza. This is by far the favourite aspect of the 3DS for my kids and offers a series of games that can only be played once you have collect Street Pass Miis while out and about. I like this because it not only gives them a reason to go for a walk but it also limits how long they play for; once the Miis have been used in the game they need to go out and collect some more.
When the 3DS launched it came with two Street Pass Mii Plaza games. Puzzle Swap was a challenge to complete different 3D puzzles, the catch here was that you could only do this by exchanging pieces with other 3DS owners you Street Passed while out and about. StreetPass Quest (Find Mii in the US) offered a mini-adventure where the Miis you collected are pitted against different enemies in a dungeon — if you finished this twice it unlocks StreetPass Quest II with further challenges. A novel twist here is the different coloured shirts worn by each Mii determined their magic ability in the game and led to my kids hunting down friends with particular coloured Miis.
In June 2013 the range of Street Pass Mii Plaza games were expanded with four more that could be purchased for download from the eShop.
StreetPass Squad (Mii Force in US) is a classic arcade shoot ’em up game developed by Good Feel (Mario & Luigi: Dream Team), where the Miis you collect determine the expandable firepower your spaceship has.
StreetPass Garden (Flower Town in the US) is a gardening simulation developed by Grezzo (The Legend of Zelda: Ocarina of Time 3D) with its own system of genetics and pollination. Players can cross their species of flower with others they Street Pass.
StreetPass Battle (Warrior’s Way in US) is a strategy game developed by Spike Chunsoft (Pokémon Mystery Dungeon: Gates to Infinity) drawing on risk where the player pits their different troops against enemies. Street Passes enable you to build up bigger armies and challenge other players to virtual battles.
StreetPass Mansion (Monster Manor in US) is a puzzle game developed by Prope (Let’s Catch, Let’s Tap) with battle encounters. Players explore a haunted house by placing Tetris style blocks and then encounter different ghosts to fight. Street Passes determine how many lives they have during each exploration.
These games each revolve around getting Street Passes while out and about. We have had good success in our City for this, although at times not had as many as the children would have wanted. To help improve this StreetPass Relay locations have been setup across Europe to proliferate Street Pass information. This works by collecting in Street Passes during the day and then offering them to passersby with the Street Pass feature turned on (and updated to the latest version). Effectively this greatly increases the number of Street Pass hits you get.
Content supported by Nintendo, including access to 3DS.