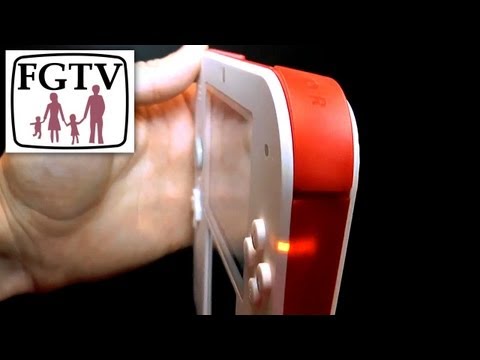 I have a look at the 2DS hardware to see how it stacks up in comparison to other 3DS models. The unit itself offers a considerable amount of redesign. Again, like the DS Lite was for the original DS, this is a complete rethinking of the 3DS form factor. Within the constraints of screen position and button requirements that existing games rely on, a largely free hand has been applied.

Firstly, the unit doesn’t fold in the middle. This may be seen by some as a cost saving aspect of the 2DS, but for families this also turns the 2DS into a much more robust offering. The 3DS hinges (and DS XL DSi before it) had worked to improve the hinges on these devices, but still it is inevitably a weak point when you see the kind of mistreatment children put it through in everyday life. Without this aspect the 2DS could happily be handed to a younger gamer without the worry that they may drop (or throw) it and cause irrevocable damage.

Those younger gamers are also easier to accommodate here as the 2DS doesn’t have a 3D feature. Again some may find this a bit odd, given the front and center nature of 3D for Nintendo. However, this again means that younger players can grab the handheld without parents checking that 3D is off on the unit or setting up parental controls.

This much you could probably garner from the press releases around the new product. What I hadn’t appreciated until getting one in my hands was how different it would feel to play. Here again we see some intelligent design coming into play. The Circle pad and X/Y/A/B buttons have moved to the upper half of the unit, meaning that players hold the device towards the top. Left and Right triggers are then accessible at the top of the device and the whole thing sits happily in your palm with its wedge design.

Build wise, it feels more like the dense solid style of the launch 3DS rather than the curvy 3DS XL. This is an industrial design that brings to mind the old Nintendo Game & Watch devices. In either black or white/red at launch (October 12th) the 2DS stands with this retro design. This extends to the reworked Home button at the bottom and the Start Select combo on the right. In some ways it is a step back towards that original Gameboy look with the D-Pad positioned similarly on the lower left.

Not being able to close will trip up some games that used that aspect of the physical device in their play mechanic. This issue has a work around of putting the device into sleep mode performing the same electronic work as closing it would — but still this will break the logic of games like Another Code on the DS — and here it is worth restating that the 2DS supports all the DS games as well all the new 3DS and eShop games.