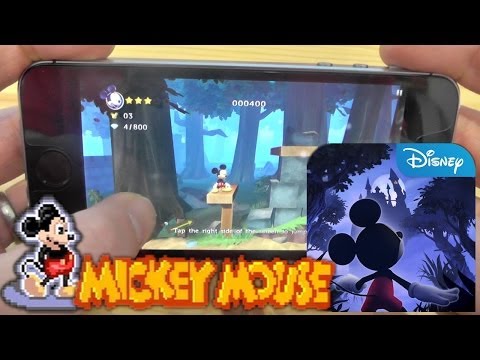 Today, Disney Interactive announced that Mickey is returning (again) to star in Castle of Illusion Starring Mickey Mouse on iOS. As with the PSN and XBLA games earlier in the year this casts Mickey in a reimagining of the Sega Genesis classic.

Players control Mickey with the touch screen as he travels through the enchanted Castle of Illusion. As in the console version, the evil witch Mizrabel has kidnapped Minnie, and it’s up to Mickey to rescue her. There are five crystals to recover and with that five worlds.

Before playing I had expected the game to be a much simpler (and easier) challenge for today’s modern audiences (read: kids). However Castle of Illusion on iOS leans more heavily on those hard core gaming routes. No only do you have a very limited number of lives, but exact and accurate jumping, exploration and general platforming skill are required.

As you can see here, playing the first level of the game took a little getting used to the touch controls. There is a real knack to getting this right. Unlike on the consoles rather than returning the movement stick to the middle to stop here it is much better to remove your thumb from the screen.

While some may find this difficulty a little demanding, there is much to praise here in bringing the full console experience to the iPhone/iPad and iPod Touch. I have been coaching my kids in the ways of platforming and they seem to be progressing well in the game now (although they really did need that help to get started).