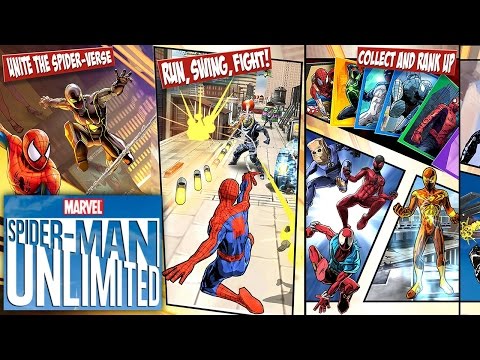 Spider-Man Unlimited is a free to play infinite runner game for iOS, Android and Windows Phone. It sees Spider-Men from different universes teaming up to fight a multi-dimensional army of Spidey villains led by the Sinister Six, who are invading the Marvel Universe New York.

Game play is the usual infinite runner staples of running, dodging, jumping, sliding and punching enemies. Fictional mineral Iso-8 from the mobile games Avengers Alliance and Marvel Puzzle Quest is back here as the collectible power source of choice, and can be bought as in-app purchases as well as earned in game.

There are plenty of game modes to enjoy: a story mode with finite levels and bosses; time-specific Event modes; a traditional infinite ‘Unlimited’ mode useful for grinding ‘vials’ to level up your Spideys; and a Spidey-Ops mode where you can send your Spideys off to perform missions while you’re not even playing.

It’s all a lot of fun, with slick cel-shaded graphics and a smart script by comics writer Fred Van Lente.

One limitation to encourage in-app purchases is your lives that need recharging after you’ve played. Sneakily, these recharge not only when you’ve failed a level, but even if you’ve completed one. This does have an upside though, as frugal gamers will be giving their aching hands a rest in the ten minutes it takes for each life to recharge.