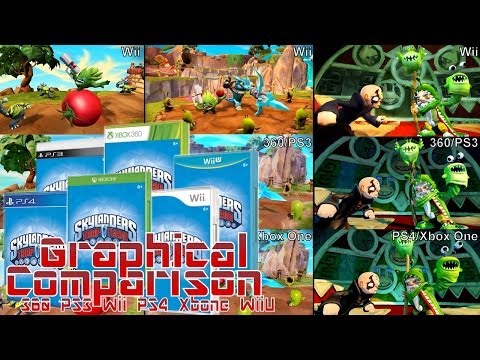 Let’s talk Skylanders Trap Team. Which version has best graphics: 360 vs PS3 vs Wii & PS4 vs Xbox One vs Wii U.

Releasing on Wii, Xbox 360, Playstation 3, Wii U, Xbox One and Playstation 4, Skylanders: Trap Team may look very different depending on the console you play it on. The game stretches it’s support across three generations of console hardware and we’re going to see some noticeable differences in the graphical quality on each platform because of that.

This video will look at the obvious graphical differences between five official screenshots from the three console generations, which we’re loosely going to categorise as follows:

Although we can’t be sure which of the three consoles the Generation 2 screenshots come from, I think we can be fairly certain that the Generation 3 screenshots are from the Playstation 4 given the comments from Activision about that platform being their current demo system of choice. Also, looking at footage of Skylanders: Swap Force on both Xbox 360 and Wii U, it’s clear to see there is no noticeable difference in quality, but that may change depending on the developer’s experience with the platform.

While you’ll notice quite a graphical leap from the standard definition graphical capabilities of the Wii in Generation 1, to the consoles in Generation 2, the leap to Generation 3 is far less noticeable. The Wii cannot compete on texture detail and it shadows are often absent when compared with more modern consoles. Generation 2 screenshots look far more vibrant overall, with characters and locations really catching the eye. Looking at the Generation 3 graphics we see some less obvious improvements, but the excellent fabric/hair textures on character models, added detail in the background of images and general enhanced clarity overall makes the game look even more appealing.

The upside of the comparison is that even on the Wii, it appears that the charm of the game still shines through. After-all the real appeal of Skylanders is in it’s characters and they’re well represented on Wii, just not as detailed.