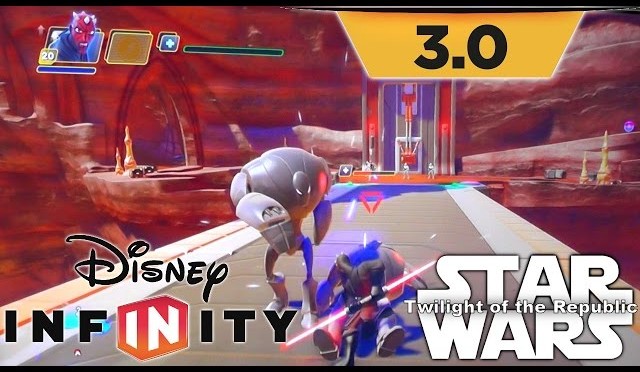 Disney Infinity 3.0 introduces a number of Star Wars playsets and characters for fans to experience. The first of these, Star Wars: Twilight of the Republic, drops players into the middle of a war on Geonosis as the Jedi attempt to uncover who activated a large droid factory hidden on the planet. The playset has a heavy focus on combat and exploration, making full use of the enhanced fighting techniques added to Disney Infinity 3.0.

As players explore the environment of Geonosis, they’ll come up against a wide range of droid enemies to push, pull and slice with their lightsabers. Each Jedi comes with their own unique force power and fighting style. Anakin for example, fights with a very aggressive style allowing for powerful combos, which is complemented by his force push power. While Ahsoka is more competent against multiple enemies, using spin attacks and dual lightsabers to make light work of droid enemies.

Each character has their own dedicated upgrade tree which is split into four branches, each dedicated to a specific area of the character’s skills. Level 20, but for the Jedi Masters out there, an extreme difficulty level can be enabled to really amp up the challenge. Combat introduces dash, spin and jump attacks, with lightsabers able to deflect laser blasts and also being capable of literally slicing droids into pieces. As each Wave of enemies is dispatched, there’s even a slo-mo finish to bring the battle to a stylish close.