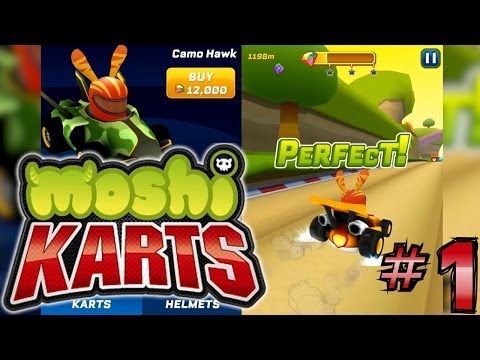 It seems like Kart racing is back in fashion this year as the folks behind the massively successful Moshi Monsters recently launched their own Moshi Karts racing game on the Apple appstore. Although not a conventional karting game in the Mario Kart vein, the game should appeal to a younger audience familiar with games like Despicable Me: Minion Rush and Temple Run.

The game is set in a bright and colourful Moshi world where you take control of Katsuma as he races around a variety of themed levels, dodging and destroying oncoming obstacles as you navigate around three lanes of traffic and power slide around corners collecting Rox. Those can then be spent in the shop to upgrade your kart and buy new racing helmets all with funky designs.

The game world is split into levels, rather than adopting the endless runner style of Temple Run, which might not be everyone’s cup of tea, but the immediate goal of completing a level rather than running to a target distance is more satisfying and achievable, which should work well for a young audience.

Along with the karts and helmets, boosts can also be bought to use on each level and if you don’t quite have enough Rox, in-app purchases are there to let you get ahead of the game. Thankfully, the largest transaction available is £29.99 rather than the usual £69.99 that’s found in many games, but even then, the 55000 Rox it buys you won’t be enough to unlock everything in the game.

There are 12 Moshling racers to collect as you progress through the game, so what are you waiting for, start your engines and get racing!

The app will also be supported with additional merchandise in July 2014, and further trading cards and games to be released. A Katsuma Transforming Track Playset with two exclusive karts and drivers is to come from Hero. Moshi Karts Trickstar Vehicles, Stunt Launchers and also the RC Katsuma Kart are also expected to be released this year.

Promotional material in the form of room decoration items were released on Moshi Monsters. The in-game shop, Yukea, sells miniatures of the karts that feature in the game.