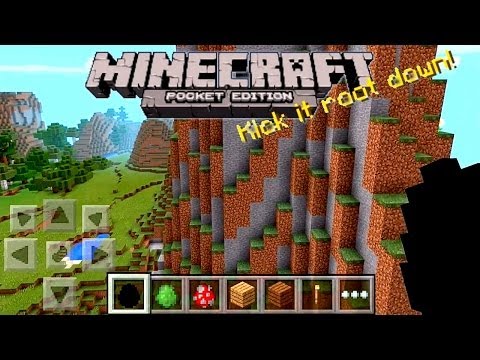 Minecraft Pocket Edition for iOS and Android devices has just got a new update and boy, is it a biggie!

With the release of Minecraft Vita Edition barely a few weeks away, Mojang have decided to upgrade Pocket Edition as close to that version as possible with a raft of awesome updates that essentially make Pocket Edition, Portable Desktop Edition for your phone or tablet.

There’s a lot of new content so lets take a look. First off the update brings an interact button which makes it easier to stop whacking things you don’t mean to. The amount of times I’ve murdered innocent sheep or villagers is too many to remember and this simple update fixes any future crimes. The population of sheep and villagers has now been saved!

We’ve also got ourselves a new crafting screen to make that essential aspect of the game easier and an absolute ton of new blocks have been slotted in to make the experience closer to the vanilla game as possible.

With that aim comes new biomes too, adding and updating existing ones so you have 13 in total to journey, mine, craft and get blown up by creepers in. Or chased by disturbing Endermen as they make their warping journey over to Pocket Edition along with Slimes, Wolves, Mooshrooms and Silverfish.

So those are the physical improvements to the game but this update goes much further with the multiplayer code being rewritten which should hopefully make this a feasible part of the game once more. It’s still only local – though if you’re willing to do some work it can be possible to connect to another user online.

Finally, this update brings infinite worlds to Pocket Edition so you can just keep on walking as long as like and never bump up against the edge of the world. That’s an improvement over the current console versions which are still limited to small world sizes.

So how does this improved version of Pocket Edition compare to the other portable version due for release in August on the PlayStation Vita.

Well, the Vita version looks more like a straight port of the Xbox 360 & PS3 versions with some touchscreen functionality built into it. There’s no infinite world on the Vita so it looks like Mojang has gone one-up on 4J Studios in that regard at least but the Vita Edition will offer true online multiplayer.

But what matters most to me is how Minecraft controls. Physical buttons rule over Pocket Edition and although this update brings it closer to the true version of Minecraft we’ve all loved and played for thousands of hours, it still struggles to capture the imagination because the controls feel so different.

However, for all the mudslinging you can do at Pocket Edition, this update makes it into an awesome experience that’s well worth the small asking price.