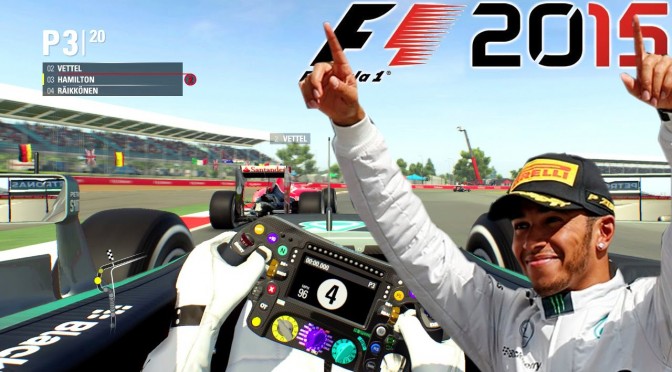 Here’s our exclusive footage captured at a recent media event for F1 2015. The Silverstone circuit driving with Lewis Hamilton.

We test out the hard difficulty setting to see how well the computer AI block. As you can see from the final lap, they do a very good job. Too well!

Race like a champion in F1 2015 and get closer than ever before to the experience of racing in the world’s most glamorous, exciting and prestigious motorsport. F1 2015 puts you in the heart of the action with a stunning new game engine that recreates the blisteringly fast and highly responsive racing cars of FORMULA ONE™ and features all-new ‘broadcast presentation’ that immerses you in the unique race day atmosphere. F1 2015 is the official videogame of the 2015 FIA FORMULA ONE WORLD CHAMPIONSHIP™ and also features fully playable 2014 FIA FORMULA ONE WORLD CHAMPIONSHIP™ bonus content. Compete as your favourite FORMULA ONE star in the new Championship Season and push yourself to the limit in the challenging Pro Season mode. Hone your skills in the new Online Practice Session, and then challenge your friends and racing rivals from across the world in Online Multiplayer.

A STUNNING NEW GAME ENGINE – A brand new game engine, built from the ground up for the latest consoles and PCs allows players to experience FORMULA 1TM in unprecedented detail.

THE MOST RELEVANT FORMULA 1 GAME YET – An earlier release in the racing calendar and with free digital updates set to keep the game up to date with the sport during the season, F1 2015 brings fans the most relevant FORMULA 1 video game ever.

THE MOST INCLUSIVE F1 RACING EXPERIENCE EVER – Featuring a naturally authentic purely physics-based handling model with enhancements and additions in over 20 areas, F1 2015 is designed to be player inclusive for both seasoned players and those new to the series.

RACE LIKE A CHAMPION – With a pure racing focus, whether you are a novice racer playing on a gamepad or an experienced gamer playing with a wheel, the new handling model will allow you to race like a champion.

GET CLOSER TO F1 THAN EVER BEFORE – Harnessing the power of the new generation engine, with new voice interaction on consoles and new broadcast-style presentation, F1 2015 immerses the player in the sport like never before.

ALL THE THRILLS OF THE 2015 FIA FORMULA ONE WORLD CHAMPIONSHIP – Honda returns and once again forms an alliance with McLaren, who also welcome back Fernando Alonso. Sebastien Vettel moves to Ferrari and, alongside a new generation of exciting young drivers on the grid, will attempt to halt the winning start Mercedes have made in the new era of FORMULA 1. The race calendar for 2015 also features a new circuit, with a return to Mexico for the first time in over 20 years.

NEW CHAMPIONSHIP SEASON – With new grid introductions and television-style broadcast presentation, the Championship Season is the most immersive FORMULA 1 experience yet. Can you beat your rivals and earn the adulation of the crowd as you celebrate on the podium?

NEW PRO SEASON – The ultimate challenge – can you master the game on its most realistic settings?

ONLINE PRACTICE & MORE – Hone your skills in the new Online Practice Session before challenging your friends and racing rivals from across the world in Online Multiplayer.