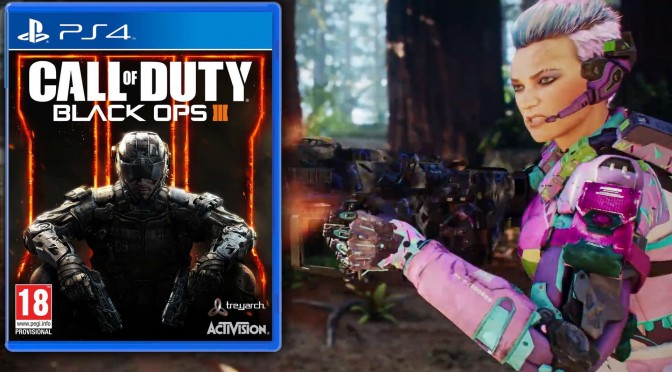 Call of Duty: Black Ops III is a first-person shooter set in the future, adding science-fiction elements to its military story.

Players can play the missions in the single-player campaign in any order. Each involves using tools and weapons to travel through a linear environment and kill enemies in various ways.

The campaign can be played cooperatively by up to two players split-screen or four players online, and various competitive modes offer both split-screen and online play.

With its focus on online multiplayer, Call of Duty: Black Ops III falls into the same category as games in the Battlefield series.

Developer Treyarch also developed the previous Black Ops games, as well as World at War, though other Call of Duty games were developed by other developers.

Call of Duty: Black Ops III is available on PC, PS4, and Xbox One from £39.99/$59.99 depending on platform. A multiplayer-only version is available for PS3 and Xbox 360. Those wanting to play online will need a subscription to either PlayStation Plus or Xbox Live Gold.

It takes around eight hours to complete the story in Black Ops 3, but many people will keep playing the online multiplayer for a long time after that.

The campaign has multiple difficulty settings for players of different skill levels.

In the UK and Europe, PEGI rates Call of Duty: Black Ops III as only appropriate for those aged 18 and older for multiple, motiveless killing, violence towards defenceless people, and strong language.
http://www.pegi.info/en/index/global_id/505/?searchString=black+ops&agecategories=&genre=&organisations=&platforms=&countries=&submit=Search#searchresults

The GRA expands on its PEGI rating by explaining that the game “features depictions of very strong violence, the motiveless killing of innocent characters, torture and the use of sexual expletives.” Examples of strong violence include “decapitation, dismemberment of limbs”, and torture such as “physical beatings of characters that are restrained in chairs or on tables and the use of water to simulate drowning”.
http://gamesratingauthority.org/GRA/

In the US, the ESRB rates Call of Duty: Black Ops III M for Mature (http://www.esrb.org/ratings/ratings_guide.jsp), with content descriptors for blood and gore, drug reference, intense violence, and strong violence. “Players use machine guns, pistols, shotguns, grenade launchers, and various “cybercore” abilities (e.g., drone control, confusion for human enemies) to kill robots and soldiers amid futuristic urban environments. Action is frenetic, with frequent gunfire, explosions, cries of pain, and blood-splatter effects. Some attacks allow players to blow up enemies or blow off their arms or legs. A handful of cutscenes depict figures being beaten, tortured, or stabbed; some stabbings are depicted fairly close up. During the course of the game, players can select emblems from a menu screen for character/team customization; a few emblems are suggestive of marijuana. The words “f**k” and “sh*t” appear in the dialogue.”
http://www.esrb.org/ratings/Synopsis.aspx?Certificate=34119&Title=Call%20of%20Duty%3A%20Black%20Ops%20III

Because it’s set in the future, Black Ops 3 touches on subjects such as climate change and futuristic military technology.

The story also addresses themes of suicide and loss, and plays with reality to unsettle the player. It also makes an effort to engage with the ethics of warfare, though the constant combat limits its ability to do so, and the focus is still on entertainment.

Although some would say these games are essentially the same each year, the Call of Duty series remains incredibly successful. While some people do play it for the single-player story campaign most focus on the popular online multiplayer, buying each new game in the series and playing it all year until the next one comes out.