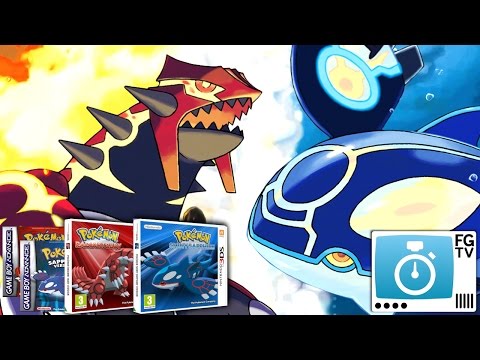 Parent’s guide to Pokemon, from what to watch out for to what makes this game great.

Pokemon Omega Ruby and Alpha Sapphire are remakes of Pokemon Ruby and Sapphire, which came out for the Game Boy Advance in 2003. Like the originals they are different versions of the same game, with different Pokemon to collect in each, to encourage people to trade with friends via Wifi and battle each other.

Pokemon games are accessible role play games that involve a similar story. You guide your character around the world and encounter Pokemon to either catch and then train, or battle with your own Pokemon. You can also battle the Pokemon of other characters.

The aim is to beat progressively more challenging Pokemon gym leaders, earning badges and making your way up to a final group of trainers called the Elite Four. Along the way you fill up your Pokedex by collecting as many of the different kinds of Pokemon as you can.

Unique to Ruby and Sapphire is a focus on weather, with villains Team Magma (in Ruby) and Team Alpha (in Sapphire) wanting to use rare Pokemon called legendary Pokemon to affect the game world’s climate. During the story players will experience either a drought or rainstorms.

The Pokemon games, including these, are developed by Game Freak.

Omega Ruby and Alpha Sapphire are only available on 3DS. The Pokemon series of games began on the original Game Boy and has been released on every Nintendo handheld platform since.

Each game costs £39.99/$39.99 on the Nintendo eShop, though you can get boxed copies for slightly cheaper on online stores like Amazon.

The story for Pokemon Ruby and Sapphire could take around 40 hours to complete, so Omega Ruby and Alpha Sapphire will probably last even longer.

PEGI rates the games only appropriate for those aged 7 and older, with a content descriptor for violence, that is “non realistic looking violence towards fantasy characters”, also pointing out that the games allow “the player to interact with others online”.
http://www.pegi.info/en/index/global_id/505/?searchString=pokemon+alpha

The Games Rating Authority expands on its PEGI rating by describing the battles: “The game presents two characters in a generic environment. The battle is turned based and without physical contact between the characters. An attack, comprising an energy beam derived from the type of Pokemon being controlled, hurls towards the opponent who suffers no injury at all other than a loss of health points. When this is depleted, the Pokémon is defeated.”
http://gamesratingauthority.org/pegi/search_aci.html

In the US, the ESRB rates Pokemon Omega Ruby and Alpha Sapphire as E for Everyone, with content descriptors for Comic Mischief and Mild Cartoon Violence. The description gives examples of some of the Pokemon attack moves (“Thunder Shock, Fusion Flare, Poison Jab”) and accompanying effects (“smacking/zapping sounds, colorful light bursts, and depletion of health meters”). It also mentions some of the “comical/bodily humor: a Pokemon with animated mucous (sp.) dripping from its nose (“It sniffs the snot back up. . .”); a ‘Belch’ attack; dialogue stating “a novice like me, still so young I wet the bed.””
http://www.esrb.org/ratings/synopsis.jsp?Certificate=33488
http://www.esrb.org/ratings/synopsis.jsp?Certificate=33524

Common Sense Media tends to rate Pokemon games as appropriate for those aged around 8 and older, stating in the description for Pokemon X and Y that “the battles are fairly low-key; there’s no visible contact, and when a Pokemon runs out of health, it simply faints”. They also point out that “kids will need to be able to read to follow the story line”.
https://www.commonsensemedia.org/search/pokemon

All of the Pokemon games focus on friendship and teamwork between the trainers and their Pokemon.

Pokemon Ruby and Sapphire also touch on climate change with the story about the villains trying to use the rare Pokemon to alter the climate and either raise or lower the sea levels. It’s not directly about global warming, but the Pokemon games always seem to feature a message about the environment and nature in general since Pokemon not owned by trainers live in the wild.

The Pokemon games are simple to grasp even by young children but contain a lot of depth. There are more than 200 Pokemon to collect, and two Pokemon of one kind may not have the same stats. As you train your Pokemon you get to choose how they develop, for example picking what moves they should have.

Even after players have finished the story there’s always plenty to do, whether that’s trying to catch them all or battling against friends. Each new version adds new Pokemon, new features, and a new world and story to discover.