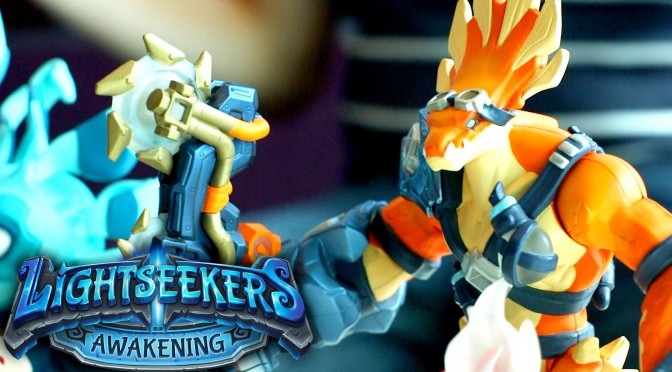 A deeper look at Tomy and Play Fusion’s Lightseekers toys to life game. Drawing on talent from Runescape, Tomb Raider and Street Fighter this isn’t just another Skylanders knock off.

We sit down with the producer of the game to hear how they crafted the toys, weapons and expansions.

There’s an integrated card game, multiplayer online mode as well as a whole host of characters to collect. We take a look at Mari and Tyrax Starter Packs that will retail for around $69.99 when released early next year.

Tantos – Welcome to Tantos, a fantastical world full of magic and mystery. Tantos is a world of dramatic landscape, from mountainous peaks to a bottomless rift, it is a world that has seen much of life and death. The planet has a giant Lightstone at its core; the magic which flows throughout Tantos has its source in the Lightstone core. 800 years ago a powerful, unexplained shockwave tore through the lifeblood of the planet, overpowering and shattering all of the world’s lightstones. This cascade effect led the planet itself to rupture, creating the massive rift – a scar across Tantos, reaching all the way down into its core. In the present day, after centuries of stability, the balance of magics on Tantos is threatened. Only the most powerful heroes, the ‘Lightseekers’ can take on the evil umbron and defeat their plan to rule Tantos.
The Game – The game itself is an action-adventure role playing game with fun and rewarding combat, puzzles and minigames designed specifically for mobile and tablet gamers. The player must choose their hero and venture out into the wilds of Tantos to uncover the sinister plots of the umbron and shine a light on the truth. Through their travels players will discover new lands and races, hundreds of hours of quests and infinitely re-playable dungeons. New content can also be unearthed or existing content altered or augmented by interacting with the Lightseekers cards and digital action figures. This interactivity provides a truly dynamic gameplay experience in addition to the thrill of seeing physical items affect the game and vice versa. As the player spends time in the game they will acquire powerful new skills, gear and abilities which in turn will grant access to increasing levels of challenge and reward. Lightseekers is being built for the players and the community will be an integral part of an ongoing journey. To that end the world of Tantos and the gameplay within will be updated weekly to provide players with the features and content they are asking for. Lightseekers will never be ‘finished’, it will grow and evolve as a living world along with the players that guide its development.
Tyrax – A reptilian race mostly be found in the deserts around Dune’s Edge. They are a very intelligent race and experts when it comes to magical technology, supporting the other races with things such as weaponry, deciphering colossi tech, and airship manufacturing.
Mari – The mari are a care free, fun loving race of water creatures. They can typically be found anywhere there is water. They tend to not take things very seriously, and their goal in whatever they do is to enjoy themselves. Yet, they are not to be underestimated, as they are powerful wielders of Storm magic.
Umbron – The umbron are loyal to death and will do everything in their power to advance evil. They are very intelligent and powerful magic users, which makes them a danger to all life on Tantos.