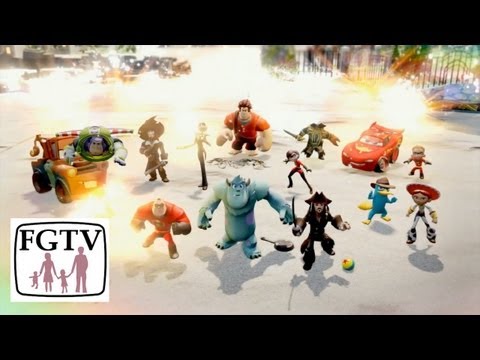 We have an in depth look at the new Disney Infinity trailer and what it tells us about the new game. It not only includes gameplay and images of the toys and portal style peripheral, it also gives a good understanding of the art style and overall approach to the product

PRODUCT OVERVIEW:
In Disney’s most ambitious video game initiative ever, Disney Infinity introduces an all-new game universe where a spark of imagination unlocks a fantastical world where players have unprecedented freedom and endless opportunity to create stories and play experiences starring the beloved characters from Walt Disney and Pixar Animation Studios’ most popular franchises.

For the first time, players will place real-world interactive figures – characters, power discs and Play Set pieces – on a device called the “Disney Infinity Base” to activate original, story-driven adventures in the game worlds, also known as “Play Sets,” of “Monsters University,” “Pirates of the Caribbean” and “The Incredibles.” In each respective “Play Set”, players will take on the role of a variety of popular characters including Sulley, the naturally gifted scarer; Captain Jack Sparrow, the sword-wielding double crosser; and Mr. Incredible, one of the world’s greatest crime-fighters, and battle enemies, solve challenging puzzles, overcome obstacles and complete a variety of other unique quests.

As players advance through each adventure, they will collect characters, vehicles, upgrades, gadgets and more which they can save to a virtual “Toy Box.” At any time, players can access their personal “Toy Box” and use the items to create one-of-a-kind Disney adventures featuring any combination of characters, environments and items across all franchises. The possibilities are endless and players are only limited by their imaginations.

KEY FEATURES:
Unprecedented Creative Play – Featuring a virtual “Toy Box” and a vast open world environment, players can create their own stories and customize their adventures combining characters, environments, gadgets, vehicles and more. The possibilities are truly infinite as Disney will add new additions from the company’s vast library of entertainment properties.

Infinite Storyline Possibilities — Disney prides itself on its storytelling culture and for the first time ever, Disney Infinity will put the story creation into the hands of consumers. Players will be able to create their own adventures in an open-world environment and will give players unprecedented freedom for creative play.

Multiple Franchises Across All Platforms — Disney Infinity introduces an all-new universe, featuring a toy-inspired art style where multiple Disney franchises and characters can exist and interact in one game and across Xbox360, PS3, Wii, Wii-U, PC and online, as well as on smart devices including tablets and mobile phones.