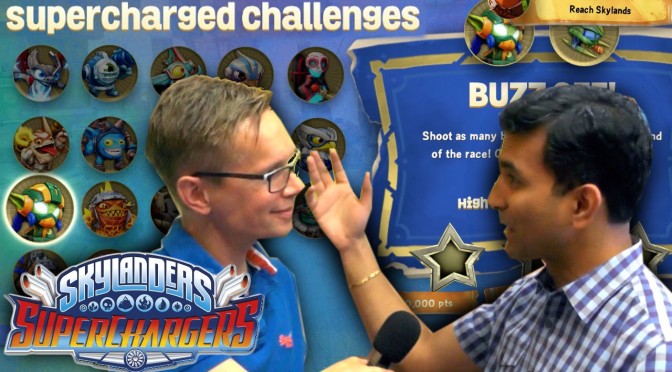 We get hands on with the Superchargers Challenge mode of the game with studio head Guha Bala. He walks us through the Academy to get the level started along with an explanation of the different Supercharger Challenge modes.

It’s particularly interesting to see the layout of the Academy is similar to Trap Team. The visuals and adornments are different, making it more racing themed.

We see an airship containing banners on the far left that might be showing how many of each vehicle based challenge type you’ve completed.

In the background as we move towards the centre of the academy you can see what looks like some kind of air/sky gate. Then down at the bottom of the screen we pass by Mags.

The villain vault is gone, replaced with a central command post manned by Cali, with Flynn close by and Hugo in the background.

In the background, the Academy door is boarded up and the Flynn and Kaos statues are missing, replaced by Hot Streak and Spitfire
Persephone appears to be in an almost identical position to Trap Team on the right hand side of the Academy.

Further on from her we can see some kind of land based area, the Supercharger Challenge start point with our racing Mabu and Buzz from Trap Team is also there in the background.