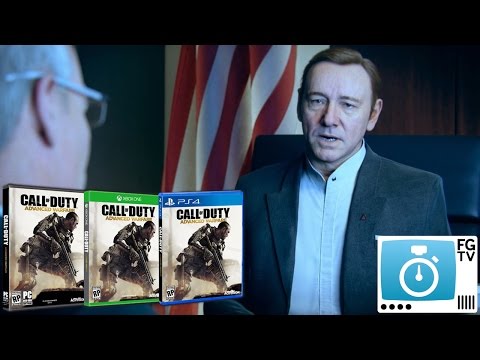 What parents need to know about Call of Duty Advanced Warfare. From what makes it great to what to watch out for, here’s the ultimate 2 minute guide.

1. Genre and story:
Call of Duty Advanced Warfare is a military shooting game played from a first person perspective, in which you play a US marine fighting a shadowy terrorist group, and the global conspiracy behind them, in the year 2054. The game introduces futuristic weaponry and equipment to the hugely popular series, including exo skeleton battle suits and laser weapons.

This is the first Call of Duty to be developed primarily for the latest generation of consoles (PS4 and Xbox One), and promises a graphical overhaul. New facial mapping systems have been used for better character animation, and with Kevin Spacey adding gravitas as technologist billionaire Jonathan Irons, that tech is put to good use.

While the main story mode can be played single player, for many the attraction of the latest Call of Duty is in the multiplayer mode, going online to battle hundreds of other fans or playing split-screen co-op at home.

2. Developer:
Sledgehammer Games, a studio that worked on multiplayer for Call of Duty Ghosts and Black Ops, developed the current generation console and PC versions of Advanced Warfare, while the XBox 360 and PS3 versions are being developed by Transformers: War for Cybertron veterans High Moon Studios.

3. Format:
Call of Duty: Advanced Warfare is available for XBox One, XBox 360, PS4, PS3 and PC. Gameplay is largely the same across all versions with the difference in console generations mainly noticeable in the visuals.

5. Length:
The main story mode of Call of Duty Advanced Warfare should take around seven hours to beat, though experienced players may complete the game quicker. However the multiplayer should keep players busy for months to come.

6. UK and Europe – PEGI rating and additional consumer information:
In the UK and Europe PEGI rate Advanced Warfare 18 with content descriptors for Extreme violence, Multiple, motiveless killing and Violence towards defenceless people. PEGI states that “there is the occasional depiction of gross violence. In one scene a soldier suffers the loss of his left arm, caused by a piece of flying metal from an explosion.” It goes on to highlight that “a soldier’s throat is cut resulting in long spurts of blood from the neck”, and after being shot players see “the bullet enter and exit his head” with a “large blood splatter.” Throughout the game there is the frequent use of the sexual expletive ‘fuck’ and derivations of the word.”

8. Common Sense Media:
Common Sense Media describes Advanced Warfare as “Definitely “Not for kids”, suitable for over 18s only, and states that ‘players spend a majority of time firing realistic weapons at enemies that scream, bleed, collapse and die when shot.’ They also state that ‘cut scenes show everything from allies getting shot to torture and execution of prisoners’ and ‘prisoners bodies are also shown hanging from the ceiling in bags.’
https://www.commonsensemedia.org/game-reviews/call-of-duty-advanced-warfare

9. Themes:
With Jonathan Irons’ Atlas Corporation influencing the warfare of the future with its technology, Advanced Warfare questions the role of the private sector in warfare, politics and diplomacy. As with the character of Atlas in the original Bioshock, the Atlas Corporation refers back to Ayn Rand’s novel ‘Atlas Shrugged’, and in the same way that earlier game explored the themes of Rand’s work there’s a very Randian streak to Advanced Warfare’s Jonathan Irons’ belief that elected politicians are a barrier to creating a rational, ordered world.

10. Why people play:
The Call of Duty series is the blockbuster’s blockbuster when it comes to action games, the biggest of the big, and with the transition to leading development on the new consoles Advanced Warfare provides the biggest explosions yet. Exo suits and laser weapons provide a twist on well worn gameplay, and Spacey adds not just star power, but a degree of acting gravitas to the potboiler thriller storytelling.