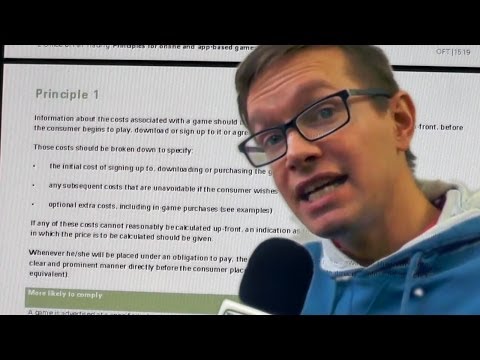 Today the OFT (UK’s non-ministerial government department for consumer and competition) published their finalized Principles for online and app-based games, but are they detailed enough to deal with both physical and virtual video-game purchases?

As you can see these principles, which the UK games industry have until 1st April to implement, focus on making in-app purchases more transparent for both parents and children. The key focus here is understanding costs up-front rather than getting something for free only to be slowly arm-twisted into ever more expensive in-app purchases.

As a parent, having clear advice over the potential costs, and distinguishing between compulsory and optional extras would make it much easier to make informed decisions — and say “no” a little more often. Principle 5 (a game should not mislead consumers by giving the false impression that payments are required or are an integral part of the way the game is played if that is not the case) should make a big difference here.

This not only applies to in-app purchases but also the toy-video-game cross over products like Skylanders, Disney Infinity and Angry Birds Telepods. Parents I talk to are often unaware of what they need to buy to finish the game and which figures are optional. Furthermore it can be hard to tell which exact virtual goods are granted from particular physical purchases. Also, where special edition toys are sold (often going for a much higher price on eBay) it can be hard to tell what additional benefits they offer in game over the standard edition (often there is no difference).

It seems to me that the principles lag behind the reality of playing games with children in a family — that toy-video-game cross over. The challenge facing my household is additional complexity around purchasing content associated with a physical toy.

In Angry Birds Go! for instance is it better to opt for the in-app virtual kart or to go into a store and but the toy (which also grants access to the virtual asset). With prices varying in the app and in my local toy store my research into this led me to essentially throw my hands up, unable to figure out the price structure to either virtual or physical toys.

Principle 3 (information about the game business should be provided clearly, accurately and prominently up-front, before the consumer begins to play, download or sign up to the game or agrees to make a purchase) may well help this, although again I think this needs a little more detail and rigor for it to be implemented in the likes of Angry Birds apps. Certainly, if there was information listing physical and virtual price comparisons of purchase options that would help immensely.

Equally this principle may require Activision to list the different special edition versions of their different toys and in-game characters so that parents and children can make better informed choices before buying next year’s game. When pressed on this previously their answer has been to say that it is sold as a Collectable Toy Line and that is enough to signal the business model to consumers. The question remains whether that is “enough” in light of these new OFT principles.

Beyond the principles themselves my favorite aspect of the OFT publication was the general guidelines they offered parents to ensure they get best value from games in their family:
– Check the ‘payment options’ settings on their device. One option is to make sure that a password is required for every purchase, rather than opening a ‘payment window’ in which the password will not be needed for any further payments.
– Check whether there are any in-game purchases or whether the game contains a social element by looking at its description on the app store or the game’s website.
– Play the game themselves to understand what children will see.
– Be aware that game content could change via automatic updates, so check regularly that they continue to be happy with their children playing a game.

As we approach the April 1st deadline in the UK it will be interesting to see how much tangible difference this makes.