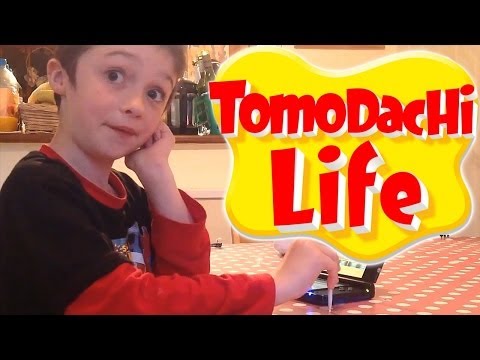 Tomodachi Life is the new life simulator game from Nintendo. But that doesn’t mean a boring 9-5 office simulator, it means more mad and crazy Japanese things to do with your Mii kinda game. Which, as far as anyone is concerned, equals awesome.

Taking cues from Animal Crossing and the Mii Streetpass games, Tomodachi Life is all about creating Mii’s and putting them into your game where they’ll have a ton of madcap, insane fun in only the way a game developed in Japan can have.

You can put all the Mii’s from your Mii Plaza into the game and as a family, I went ahead and put them all in to see what happened. Though I used my family you can put anyone or anybody in there. From game characters like Mario, or Lightning Farron from FF13, or celebrities like Reggie Fils-Aime from Nintendo of America or the 11th Doctor, just as some personal examples.

Once in the game these guys are going to need looking after. So food, clothes, different room decor etc. can all be bought for them. You’ll solve their problems watch them build relationships or rivalries and as you do so, unlock more of the island with more things to do on it.

News reports will keep you up to date with what’s going on and you can even invade your mii’s dreams to see what their inner thoughts and desires are.

If all of this sounds dull or rote then Tomodachi Life isn’t really about playing a game, it’s more about observing what your miis get up to and the absurd shenanigans programmed into the game.

This humour wouldn’t be half as funny if the Mii’s were silent but fortunately Tomodachi Life has built in voice synthesizer which can replicate a variety of different voices. None of it is meant to realistic and it makes the nonsense spouted by the characters even more hilarious when you can hear it being said.

This is all an excellent setup and the game has enough ridiculous minigames to keep you occupied for many hours – especially with a real-time clock which comes with specific time-appropriate events. I imagine that just like Animal Crossing, special events will happen on specific days meaning this is going to be kept in the kids 3ds for a long time.

Perhaps you’ll notice I said the kids 3ds and not mine – I was fully expecting Tomodachi Life to grip me in the way Animal Crossing or Harvest Moon usually does. On this occasion even though I can appreciate the madness I just didn’t find it holding my attention as I’d hoped. My kids on the other hand, well let’s just say reviewing this game has meant getting another 3DS for both my game-playing sons to use as they absolutely adore the world Nintendo has created. And they love playing with Tomodachi Life in a way I haven’t seen them do before. They create lyrics for the different song styles in the game, act them out and generally have a great, happy time when playing it.

For a hobby that has so many negative connotations associated with it I found Tomodachi Life allowing my kids to express themselves in a positive and creative way. With humour and also learning that fights with their game characters, just as in real life, can be resolved. I can’t say it touched us as a family on a deep level – it’s not meant to, it’s just meant to be fun. But a truly fun and silly video game can be a therapy itself.