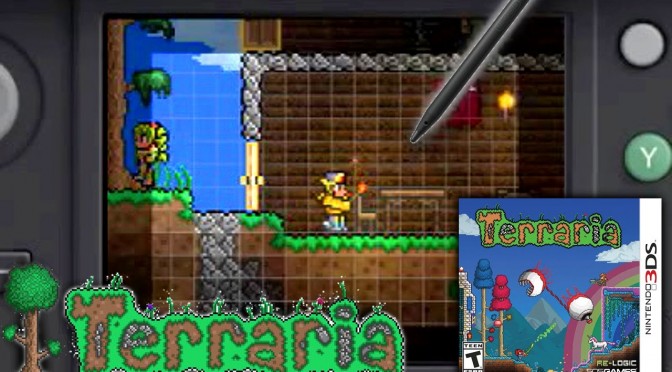 Terraria utilizes dual and touch screen controls on 3DS and Wii U.

Although the Wii U version wasn’t shown, I got to try the 3DS game at Gamescom last week. As with any transition of a game to new hardware it took a little while to get used to how it worked, but before long I was happily oblivious to the form factor of the device and could simply get on with enjoying the game.

On the 3DS it does has some advantages. Not least is the second screen that can be used to display you inventory or a zoomed in view for super accurate building. It also combined both buttons and touch screen to enable quick and efficient navigation and building.

Although I decided to stick to button controls in the game, as you can see in the video here, the touch screen zoomed mode was also easy to use and fitted well with the style of game-play.

Terraria hasn’t got a firm date yet on either 3DS or Wii U, except the promise from publisher 505 Games that it will launch in early 2016.

Happily there is also a multiplayer mode available both local and online. This enables 4-8 players to journey together into new worlds. The 3DS version offers local WiFi play supported for up to 4 friends, while the Wii U can accommodate 8-player online or 4-player splitscreen using classic Wii Remotes.

The game sports all of the PC version updates with over 1,300 crafting recipes, 150 enemies and 15 bosses to battle.Best of all is a comprehensive tutorial mode that will introduce new players to the ins and outs of the game.