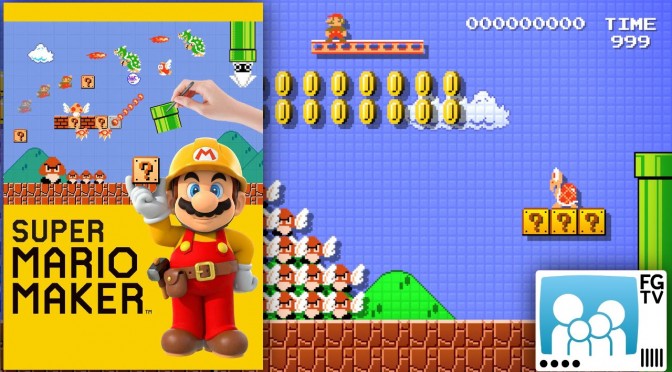 1. Genre
Super Mario Maker is an extensive game maker for the Wii U through which players can create and share their own 2D platforming levels in the style of Super Mario.

Players use the Wii U GamePad’s touch screen and stylus to design their levels, dragging and dropping objects onto the grid. You can choose between different environments – e.g. underground, underwater, ghost house – and different eras that make your level look more retro or modern. Once you’ve proven that your level can be completed, you can upload it to Course World for other players to play, or just share and swap them with the rest of your family.

You begin with a limited number of level creation tools, unlocking more as you play and create more. You can use Amiibo to unlock costumes for Mario to wear.

Other games, like LittleBigPlanet, have had level creation tools that have been used to make millions of levels, but Super Mario Maker was designed around level creation rather than as a platformer first.

2. Story
Super Mario Maker doesn’t have a story mode as such, but it does feature a mode called the 10 Mario Challenge that challenges you to get through eight levels in ten lives.

4. Format
Available for Wii U only, Super Mario Maker costs £34.99 on the Nintendo eShop.You can also get a version boxed with a pixelated Mario Amiibo.

5. Duration and Difficulty
With intuitive touch-screen controls, it should be easy for even young players to create their own levels.

6. UK RatingIn the UK and Europe, PEGI rates Super Mario Maker as only appropriate for those aged 3 and older.
http://www.pegi.info/en/index/global_id/505/?searchString=super+mario+maker

8. Themes
Super Mario Maker may not have a narrative, but it enables players to express their creativity and learn about video game design through trying it out for themselves.

9. Why people play
A large proportion of people of all ages who play video games have played at least one Mario game, but this is the first time that those players are able to create their own Mario levels to try. Maybe future developers will get their first taste of game design with these accessible tools.