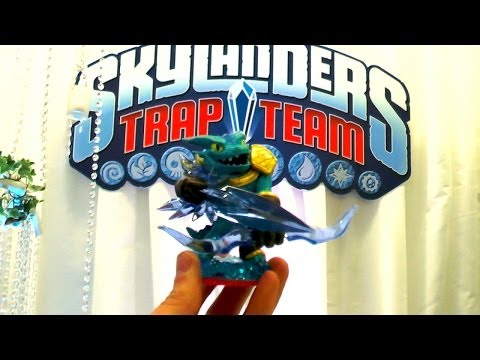 He talks us through the different features of the new game along with hands on with some of the new figures.

Along the way Jeff talks about the different platforms the game is being developed for and how Toys for Bob is looking after the Wii, 360 and PS3 versions rather than the next gen games that are being handled by Beenox. An interesting move that will give greater impetus for the now aging (but popular) Wii version of the game.

Jeff also confirms (we think) that Trap Team will include female heroes of their titular characters. The Trap Masters we have seen have all been male but there are some female characters to arrive soon.

So far we have had hands on with the following Trap Masters:
– Snap Shot
– Wollop
– Wildfire

Then there are new Core Skylanders
– Chopper
– Food Fight

40 Trappable Villains including Chompy Mage and Shred Naught. With each Trap element being able to hold four enemies this suggests that we will see two new Elements so that each of the Trap keys has the same number – four each.