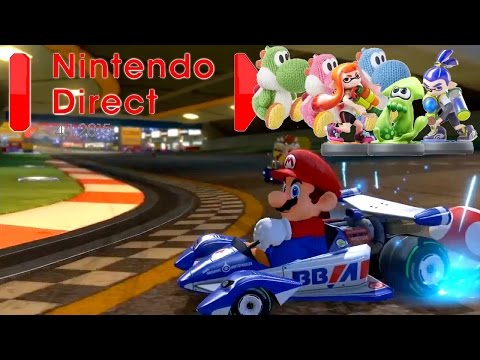 We dig through the Nintendo Direct news for families. Everything you need to know in 10 minutes.

Amiibo Cards: A totally new form of amiibo is coming this fall! The first set of amiibo cards will be based on Animal Crossing characters and will be compatible with the Animal Crossing: Happy Home Designer game.

Wooly Amiibo: A new set of Yoshi amiibo figures made of actual yarn will launch later this fall along with the Yoshi’s Woolly World game. Tapping one of these yarn amiibo to the Wii U GamePad controller while playing Yoshi’s Woolly World will make another Yoshi appear in the game to assist the player. The Yarn Yoshi amiibo will be available in three colours: green, pink and light blue.

Splatoon Amiibo: Launching simultaneously with Splatoon on May 29 are Inkling Girl, Inkling Boy and Inkling Squid amiibo figures. By tapping one of these amiibo to the GamePad, players can receive special missions to unlock weapons and gear. Also for Splatoon there are new single-player and online “Turf War” modes, along with competitive “Ranked Battle” 4-on-4 mode.

Mario Kart Amiibo: On April 23, a new free downloadable software update to Mario Kart 8 will add support for nine more amiibo figures, including Mega Man, Sonic and PAC-MAN. Players can tap these amiibo to outfit their Mii characters in Mii Racing Suits themed to those amiibo characters. We will also be getting a super hard 200cc racing class for Mario Kart 8 via a free downloadable update on April 23 alongside the new paid DLC Pack 2.

By tapping a new Animal Crossing series amiibo card to the New Nintendo 3DS XL system or NFC reader/writer accessory, players can design a room for that specific character on the card and scan additional character cards to invite those characters to visit. Animal Crossing: Happy Home Designer will launch this fall.

Pokémon Rumble World 3DS: A new Pokémon Rumble title will be free to download (with paid content) and features more than 700 Pokémon, all the way from the original Pokémon Red and Pokémon Blue games to the recent Pokémon Omega Ruby and Pokémon Alpha Sapphire games. Coming to Nintendo eShop on Nintendo 3DS on April 8.

New StreetPass Games: On April 16, two new StreetPass Mii Plaza games launch. In Ultimate Angler, players visit the “StreetPass Islands” to try to catch more than 150 types of fish and legendary monsters with bait received from Mii characters via StreetPass. In Battleground Z, players receive items based on the hobbies of their Mii Plaza StreetPass characters to defeat a horde of zombies.