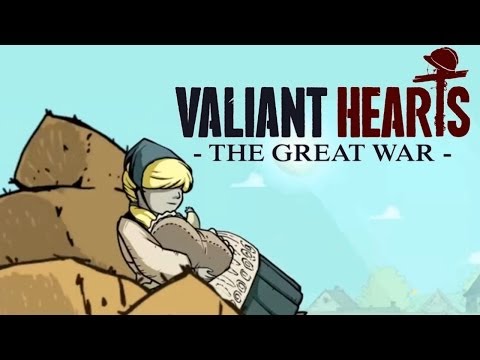 Valiant Hearts: The Great War is a puzzle adventure game developed by Ubisoft and, as the title suggests, is set amidst the terrible destruction of the First World War. As a parent, broaching the subject of war with my children has always been a difficult thing. Boys love to play war – I remember doing the same with no thought or clue for the reality of it. But as my eldest has reached an age where he can understand this and as the centenary of the start of the First World War draws nearer, does this game successfully tackle such a weighty subject?

I don’t feel that video games are very good at all when it comes to portraying the reality of real war. Too often they are jingoistic, soldier-worshipping adrenaline rides – which is great for a visceral shooter, but totally inappropriate when it comes to faithfully recreating the real thing.

The First World War isn’t used much in video games for a variety of reasons. The nature of the combat and the pointlessness of the war itself have kept many developers away from the time period. Now with the centenary of the war coming this summer maybe that time is near an end.

Valiant Hearts’ gameplay is part-adventure, part-puzzle game and keeps engaged with a variety of mini-games. If I’m honest I’m less interested in the gameplay and more concerned with the narrative – inspired by letters written during the Great War and following four strangers and a dog who help a young German soldier find his love.

The themes of survival, sacrifice and friendship all look to play a part in the span of the war. The art style looks interesting with characters looking goofy and caricatures of their nationality. It looks initially lighthearted but there’s a darker edge to the way things are drawn, a roughness that seems appropriate for the blood-soaked fields of France and Belgium.

So at least visually I’m convinced Ubisoft have hit the right tone with Valiant Hearts, it remains to be seen if the story can do the same

Please let me know in the comments what you think about Valiant Hearts. Do you think it could be a good game for kids to be educated about WW1 or should that subject be left to the classroom or TV. And how do you broach the subject of war with your kids? It’s reality and consequences.