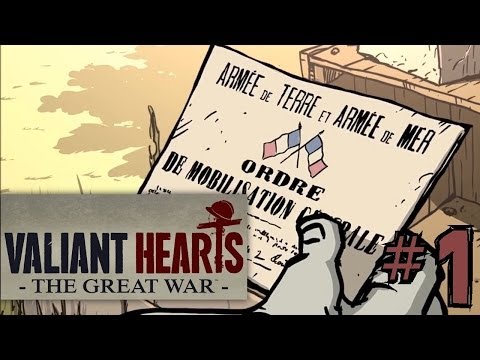 Valiant Hearts: The Great War is the story of crossed destinies and a broken love in a world torn apart. It gives players the chance to live a touching yet comical adventure which focuses on the journey of four people as they brave the battles and difficulties of the Great War following their faithful canine companion. All of the main characters are inextricably drawn together, and friendship, love, sacrifice and tragedy befall each as they help each other to retain their humanity against the horrors of war.

Join Adam as we play through the first 20 minutes of Valiant Hearts and experience the powerful opening to this impressive World War One video game.

Valiant Hearts The Great War tells the story of four crossed destinies and broken love as the world tore itself apart between the years of 1914-1918 in The Great War. A puzzle adventure game at its core.

The game begins with the briefest of introductions on how the war started and soon shatters the lives of Karl and Emile, sent off to fight for their opposing nations. The transition from upbeat training to the reality of the front line is made with such finesse you can’t help but be caught up in drama.

It’s an excellent start and does a great job of drawing you into the game. Before long the adventure and platformer puzzle element come into play and although they are nothing too taxing or complex, they serve as a great buffer between the story beats.

Though this is a deep and dark subject matter, the game has a few light moments that also help to break up the chapters of the story. From driving French troops to the front in a taxi, to avoiding attack from a giant zeppelin or APC these passages play more like a rhythm game as you avoid obstacles to the beat of some well-known classical music. It might seem odd or even disrespectful to have these entertaining interludes breaking up the story of life on the western front but they add a much needed respite, giving those important moments much more impact.

Perhaps Valiant Hearts’ greatest aspect is the historical accuracy that Ubisoft have gone for. I thought the inclusion of Freddy, the American fighting alongside the French in 1914, was more a case of pandering to an American audience but the impressive historical documents and facts back up his inclusion as well as a great many other instances.

Presented in the form of authentic photos, snippets of letters or collectable items, these bring home the reality of what happened a hundred years ago and make the story beats of Valiant Hearts all the more powerful. Without really knowing it I found myself picking up facts and interesting aspects about the Great War that I didn’t know. This is the best kind of educational material – it’s fused perfectly into the story and gameplay of Valiant Hearts and encourages me that this kind of game can be used to educate in an interesting way.

None of this would be half as meaningful if the characters weren’t engaging, sympathetic and interesting. Although the art-style makes them into caricatures of their nationality at times it doesn’t affect the meaning their stories have on you. It seems to actually make it more impactful and real, especially as the game puts you in well-known battles and environments. The German-born Karl torn from his young family, the brash muscle-bound Freddy who’s filled with destructive revenge, Anna, the gentle yet strong-willed nurse who helps soldiers on both sides without question and Walt, the dog that binds all those characters together.
Then there is Emile, the main character of Valiant Hearts and the real emotional core of the game. He’s a grandfather, joining up to defend his French homeland out of duty, a reluctant hero decorated alongside Freddy for their bravery in one mission. But he is driven out of love for his daughter and grandson, and his friendship towards the American. He’s no gun-toting hero that most video games or films like to present to us, he’s just an ordinary man trapped in the most brutal and despairing circumstances.

You may think that Valiant Hearts is using perhaps a too depressing a subject matter to be worth playing, or that a video game set amongst the destruction of those terrible years disrespectful or inappropriate.

I think that Valiant Hearts strikes a near-perfect tone and balance with those issues, blending educational material, engaging puzzle/adventure gameplay with a story that you’ll want to see to the end.

There’s not many video games I’d recommend to those who don’t play them, but Valiant Hearts is a great example of one I would and it is the only video game that I can say pays tribute and respect to those who fell 100 hundred years ago.