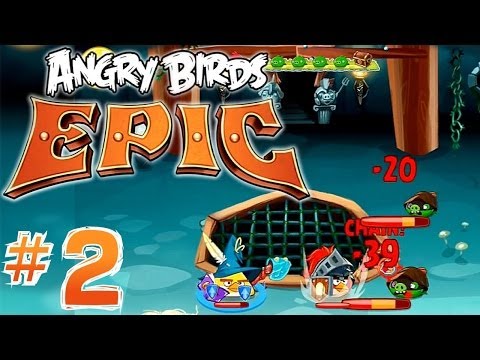 Time for more hands on RPG action with Angry Birds Epic on the iPad. In this 2nd Let’s Play in the series we explore the Cobalt Plateaus further with Red and Chuck, fight our first battles against Big Boss, Prince Porky and Pyropig, before entering the Pig Castle on our quest to save the eggs. On the way we’ll buy some hats from the trainer, cook up some banana juice and craft some more weapons and armour.

As we progress through the game one of the most pleasing aspects so far has been the lack of in-app purchase pressure. At no point in the game are we heavily encouraged to buy the various virtual currencies at play; and although they are currently off limits to us (probably due to region restrictions), it makes a nice change to play a freemium game that focuses on gameplay first, with added benefits available, but not necessarily required (as yet).

Our experience with the game so far has been a surprising and extremely enjoyable one. Some previous levels have been replayed, which has helped us level up and be able to cope with bigger challenges, but so far, that grinding aspect, familiar in RPGs and freemium games, hasn’t been a significant overhead. It’ll be interesting to see if the game is just easing us in and whether these aspects will cause any annoyance as our quest takes us further into piggy territory.