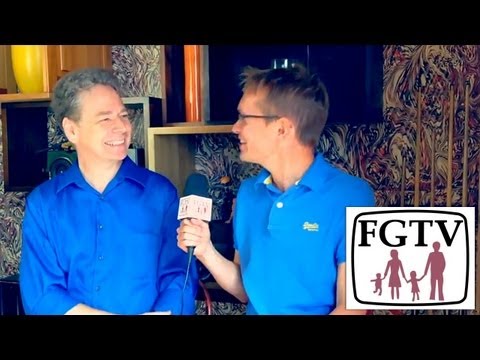 I caught up with Paul Reiche, CEO of Toys for Bob the creators of Skylanders Giants, in a London members club for an afternoon fireside chat. In what turned out to be my longest interview to date for FGTV, it was good to be able to get into more detail about the game and the studio.
We found out about wired portals for all consoles, upgrade paths, wow pows and all manner of other things listed below (with a little help from the FGTV community and Wesley Williams in particular.

Story: After being cast out of Skylands at the end of Spyro’s Adventure, Kaos reawakens on Earth. Seeking a way to return to Skylands he manages to electrify his body and reach out to activate a group of Ancient Arkeyan Giant Robots (whose leader is voiced by George Takei). This Ancient Arkeyan Machinery teams with Kaos to take over Skylands.
Meanwhile, back on Skylands, Flynn has used the pile of cash he received for helping to vanquish Kaos to buy a cursed ship. The Skylanders once again come aboard and together they go in search of the lost city of the Arkeyans as they fight to stop Kaos’ evil plan. Hugo, Cali and Persephony return and are joined by Ermit the Hermit, a new and very grumpy member of the supporting cast.
Game Facts:
– Series 2 figures have one additional (Wow Pow) upgrade and can switch between upgrades on the fly.
– All characters from both games go to Level 15.
– There are no batteries in the portals anymore as they are replaced by long cables to help families save on batteries.
– LightCore figures will drain old battery powered portals slightly faster.
– Re-worked characters (Series 2 + 4 LightCore) will work in Spyro’s Adventure, but they will play exactly like Series 1 figures.
– LightCore figures will still light up when playing Spyro’s Adventure, but only from a cosmetic stand point and not in game. This explains the packaging of the LightCore Skylanders stating they do now work in the original game.
– Toys for Bob envision using LightCore character’s light explosion entrance as a way to dispatch lots of enemies because it causes damage in a smart bomb effect.
– The only areas you can’t access with Series 1 characters are the Giant specific areas.
– One Skylander of each element and a single Giant will allow you to access all of the game.
– 3DS version is more of a platform game and now developed by N-Space.
– All character development and customisation is cross platform.
– All figures released with Giants (i.e. orange based) introduce a new heroic challenge.
– Series 1 characters can be used in the new heroic challenges to gain new upgrades.
– The game now has difficulty levels that can be changed on the fly.
– Finish the game and unlock nightmare difficulty level.
– All magic items and adventure packs work in Giants.
– Adventure packs will exist and will work the same as the previous ones.
– Battle Magic Packs are focused on Player vs Player, and come with two figures and a “LightCore” magic item.
– There’s a new Player vs Player mode called Ring Out.
– The Battle Magic Pack item can be used in the single player game and is time limited like regular magic items.
– A higher supple of toys will be produced this time to stay ahead of demand.
– The figures will be released in waves like the first game.
– However there will be more toys released earlier in the cycle this time.
– More special edition toys (Legendary, Glow, Flock etc) and golden ticket (Silver, Gold etc) again this year.
– There was the hint of more Sidekicks although not confirmed.
– Skylanders Giants doesn’t use the NFC feature on the Wii U controller because of the location and inabilty to recreate the portal experience — keep toy visible during gameplay.
– LightCore toys will glow in the real world if you place them near other NFC devices such as the WiiU controller.
– Skystones is collectable virtual card game inside the Giants game.
– Money can be used to buy a variety of different things (hats, charms etc. but no clothes).