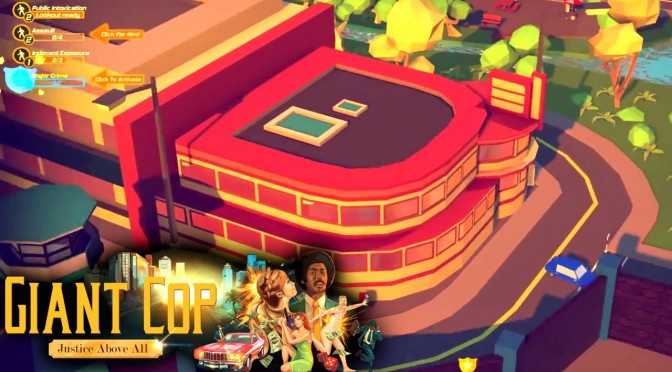 Giant Cop has a simple premise. You play a god sized cop tasked with keeping the peace in Micro City.

The first thing that strikes you about the game though is the art style. It feels like you are playing in a 70’s police show. There’s a disco aesthetic throughout.

Navigation on PC is through the mouse with the player being able to zoom in and out much like Sim City. Unlike that game though the focus here is about detecting crime rather than growing the city.

Progressing through all manner of arrests grants you both money and new equipment. Gain a police car and you can make arrests on the go.

Slightly strangely you can also buy additional laws that you can then arrest more citizens for. At one point in the demo we dragged a citizen into a bar who came out drunk and was then promptly arrested.

As you play the city will change in response to your performance of the game. The whole environment is clickable and interactive so the space invites the player to explore and investigate the city further.

It’s planned primarily for PC but has also been tested on tablet. Certainly it looks like it would be a good fit for any touch screen. I asked whether the Vita might be another platform, and that seemed a possibility too.