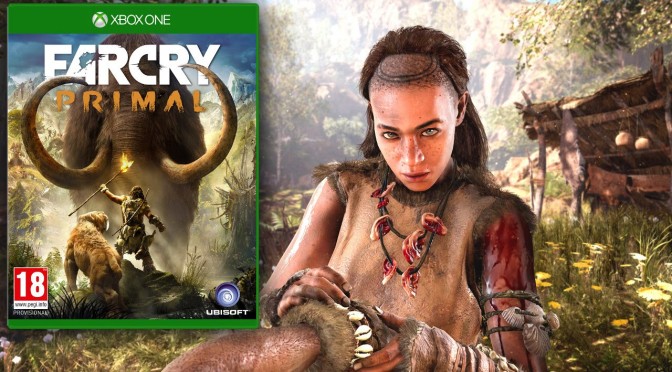 In collaboration with GRA for PEGI and Consumer Information, here’s our Quick Guide to Far Cry Primal.

Far Cry Primal is an action adventure game set in the Mesolithic period. Played from a first person perspective, the player must explore a large open world while fighting enemies and savage animals. While previous Far Cry games have been first person shooting titles including modern firearms and grenades, Primal provides a unique prehistoric twist on the genre with stone age weaponry like bows and stone hatchets.

As well as exploration and combat the player must craft weapons, build up their tribe and encampment, as well as undergoing shamanic spiritual journeys and training animals to assist them. As with the most recent Assassin’s Creed game, Far Cry Primal is single player only and has no multiplayer component.

A follow up to Far Cry 4, Far Cry Primal shares many features with other Ubisoft open world series like Assassin’s Creed and Watch Dogs.

2. Story
Far Cry Primal casts the player as Takkar of the Wenja tribe, who has to help his people against two rival tribes while also dealing with threats from wild animals and the harsh environment.

4. Format
Far Cry Primal is available for PS4, XBox One and PC for around £50 in the UK or $60 in the US. More expensive editions featuring downloadable mammoth missions and a collectible box are also available. No season pass has been offered for the game, although the bundled digital content may be made available separately at a later date. With no multiplayer mode a PSN or XBox Live Gold account is not required.

5. Duration and Difficulty
The main campaign of Far Cry Primal may be completed in around 15 hours, although less experienced players may take longer. Completing every side mission and task in the games open world may push playing time up to 25 or 30 hours.
http://howlongtobeat.com/game.php?id=31054

6. PEGI Rating
In the UK and Europe, PEGI rates Far Cry Primal 18, suitable for adults only, due to strong violence..

7. Additional Consumer Information from GRA
The GRA expand on their PEGI details by saying that the player can use a range of weapons, but that ‘bladed weapons and clubs will cause the worst of the violence’ and when used will cause ‘lots of blood effects’. The effects of violence might be obscured by the blood and speed of the action, but once a fight is over inspection of bodies will reveal that ‘heads and limbs can be missing.’ Ritual sacrifice, cannibalistic behaviour, and sexual intercourse can all be seen in the game.

8. Themes
The Far Cry games have always featured a lead character surviving against the odds in a hostile, exotic environment, and taking the player back to the Stone Age, depriving them of any of the technology and weapons available in modern day shooters, certainly raises the stakes. Running on a day/night cycle the game’s open world becomes more dangerous at night, as wild animals hunt and prowl, and the use of fictional but rigorously worked out languages for the three tribes increases the sense of alienation.

The theme of helping your tribe survive and prosper in prehistory, of establishing the very beginning of human society, is a strong hook for a game. Shamanistic religious experiences are an unusual feature for a game, as is the strong bonds Takkar can form with animals, creating a strong sense of wilderness.

9. Why people play
Stripping the Far Cry formula of all the trappings of modernity – and real world extras like multiplayer and season passes – make Far Cry Primal a stripped-down, focussed installment. The prehistoric world is an entrancing one, one not seen often in games. That exotic and, yes, primal backdrop will entice many.

Underneath it all this is an Ubisoft open world game where areas can be opened up by locating and taking down specific key locations, and where mapped areas are filled with side quests and distractions. It’s a common structure that underpins Watch Dogs and Assassin’s Creed games as well as this series, and may feel overly familiar, even down to geographical similarities to the map of Far Cry 4.

How well you like Far Cry Primal may rest on how often you’ve taken this ride before – and whether you’re minded to do so again.