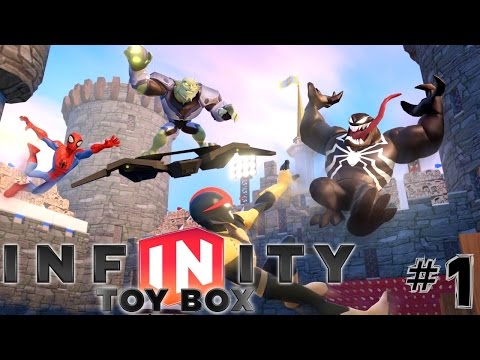 Disney Infinity 2.0 Marvel Superheroes has landed, which means it’s time to finally get our hands on Toy Box 2.0. Whether you buy the Marvel Superheroes Starter Pack or the Toy Box Combo Pack, both sets come complete with the new version of the Toy Box. For Disney Infinity 1.0 owners who don’t want to buy another starter pack, there’s also the opportunity to digitally upgrade via a downloadable release later in the year.

In this first in a series of videos looking at the Toy Box, we try and find our feet with the “Introduction to the Toy Box”. If you’re new to Disney Infinity and just looking for a refresher, this introduction should show you around all the features you’ll have at your fingertips when you start creating Toy Boxes of your own.

While we’re exploring Toy Box 2.0, we took the opportunity to try out our old playset pieces from Disney Infinity 1.0 on the Infinity Base. While they don’t allow you to play through the same adventures from the previous version of the game, they do unlock all of the toys you could find within those adventures at no extra cost. Our Toy Box suddenly looks even more fun with the inclusion of toys from The Incredibles, Monsters Inc, Pirates of the Caribbean, Cars, The Lone Ranger and Toy Story!

While we play around in “The Introduction to the Toy Box” we are introduced to the racing components of the game, pitting us against the legendary Lightning McQueen and friends from Pixar’s Cars. Once Tony Stark has had his fill of being schooled on the racetrack, it’s time to fly to the desert city of Agrabah (made famous in Disney’s Aladdin) as we go in search of the sparks we need to upgrade Iron Man with his devestating Missle Barrage attack.