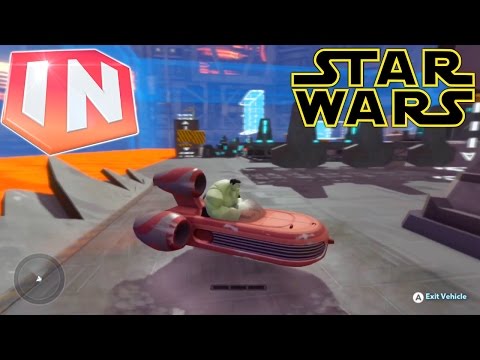 We take a look at the Disney Infinity Landspeeder and Lightsabers. Collect all the Marvel characters in Disney Infinity 2.0 and it’s reported that you get a special unlock of Luke’s hover vehicle from Star Wars Episode IV A New Hope.

The vehicle has also appeared in some user genereated Toy Boxes that can be downloaded in the game — offer a much more cost effective route to getting this Star Wars icon.

Although my kids haven’t seen the first three Star Wars films yet (I started them on Episode IV as any good parent does) they have seen IV, V and VI. They immediately recognized Luke’s iconic vehicle and set about making their own Land Speeder races. There’s something pleasing about seeing the various Guardians of the Galaxy characters cross over to the Star Wars universe to race a Land Speeder.

There is no official word on whether this year’s Disney Infinity will be based around the Star Wars franchise, but with a new film coming out it has to be pretty likely.