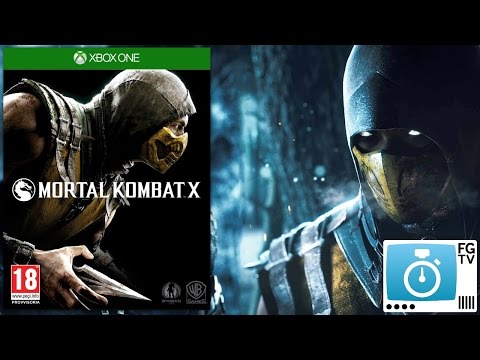 From what’s great to what to watch out for here’s our 2-min guide on Mortal Kombat X.

1. Genre
Mortal Kombat X is a fighting game in the Mortal Kombat series that began in the arcades in 1992 and has now moved onto home consoles. You choose a fantastical character to fight against another computer or human controlled opponent, locally or online. The characters are 3D, but the combat takes place on a 2D plane, that is the characters can only move left and right, or jump, but haven’t got 3D movement.

Each character has a different set of moves, and players produce these moves by memorising combinations of buttons. An energy meter gives access to special moves, and the characters can also sometimes interact with features of the environment.

Grotesque finishing moves are a headline feature that are used, as the name suggests, to finish characters off. Mortal Kombat is known for its startlingly gory finishing moves.

Other games in the genre include the Street Fighter and Tekken games.

2. Story
While Mortal Kombat X has something of a story about good versus evil, the framework is similar to that of most fighting games, with the player facing one character after another in progressively more difficult fights.

4. Format
Mortal Kombat X is available for PC, PS4, and Xbox One, and a version for PS3 and Xbox 360 is due later this year. It costs between £35/$60 and £50/$60 depending on platform. To play online on either PS4 or Xbox One you’ll need a subscription to PlayStation Plus or Xbox Live Gold.

5. Duration and Difficulty
Because of its emphasis on skill and multiplayer, Mortal Kombat X is a very replayable game, so players are unlikely to finish the story mode and be done with it.

On the surface, Mortal Kombat X is an easy game to grasp – you don’t have to work out where to go or what to do, you just press buttons – but with its button combinations and reliance on reaction speed it’s difficult to master. Fighting games have championships, and some players dedicate a significant portion of their time to honing their skill to beat others.

6. UK Rating
In the UK and Europe, PEGI rates Mortal Kombat X as only appropriate for those aged 18 and older for “frequent strong violence and occasional strong language”.
http://www.pegi.info/en/index/global_id/505/?searchString=mortal+kombat+x

The GRA expands on its PEGI details by characterising the violence as “frequent” and “gross”. “Most gruesome”, it says, “are the ‘brutality’ and ‘fatality’ moves which players may perform on their weakened opponents. Almost all of these moves involve decapitation, dismemberment or bisection. Otherwise, characters may have their jaws kicked off, their heads ripped open, be chemically burned or impaled. The injuries sustained in these moves can be incredibly detailed, featuring clear and gory images of characters’ internal organs. The game also shows these injuries in X-ray vision, as skulls and spines are broken, or daggers plunged into eyes and ears.

There are also instances of violence against vulnerable and defenceless persons, in which restrained characters are shot at and slashed across the chest.”

Other concerns include “occasional use” of the “f” word and “online playing capability, which may involve real-time interaction with other players.”
http://gamesratingauthority.org/pegi/search_aci.html

7. Other Ratings
The ESRB rates this game for Mature 17+ audiences with descriptors of Blood and Gore, Intense Violence, Strong Language.

“Many of these finishing moves depict over-the-top instances of violence: a character ripped in half; a character’s face sliced off with a sword; a character mauled in half, leaving entrails exposed. The words ‘f**k,’ “sh*t,” and “a*shole” can be heard in the dialogue.”

8. Themes
The overwhelming theme of Mortal Kombat X is its violence. Each game in the series attempts a more detailed, more gruesome set of potential injuries and fatalities than the last. Some players may not be able to stomach the level of violence found in this game, even those who normally enjoy games in the genre.