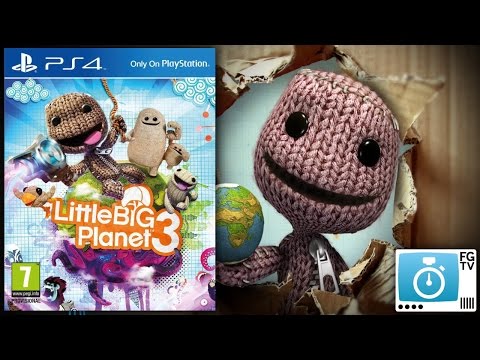 1. Genre and story:
Like the previous games in the series, LittleBigPlanet 3 is a platform game where you navigate a character through various levels, jumping on platforms and solving puzzles to do with objects like switches and levers.

Rather than one character as in the first two games, LittleBigPlanet 3 introduces three new “Sack” figures with unique abilities. The four-legged Oddsock can wall jump, Swoop can fly, and Toggle can change its size to weigh down platforms when big or walk on water when small. Sackboy has power-ups including a Hook Hat and Dash Boots. Up to four players can use these characters together in the shared screen cooperative play.

LittleBigPlanet 3 expands on the level creation tools in the previous games, and allows players to make bigger levels. Players can then share these levels online, and play those made by others.

2. Developer:
While the first two games in the series were developed by Media Molecule, LittleBigPlanet 3 was developed by Sumo Digital, the studio responsible for Sonic & Sega All-Stars Racing.

3. Format:
LittleBigPlanet 3 is the first game in the series to come to the new generation of consoles, though it’s still exclusive to Sony platforms so is only available for PS4 and PS3. The PS4 has the advantage that players can use the DualShock 4’s touch pad in creation mode.

5. Length:
Expect LittleBigPlanet 3’s adventure to last around 9 hours. However, collectable stickers and level creation will give players a reason to go back for hundreds of hours with the game.

6. UK and Europe – PEGI rating and additional consumer information:
In the UK and Europe, PEGI rates LittleBigPlanet 3 as only suitable for those aged 7 and older, for “non realistic looking violence towards fantasy characters”, “pictures or sounds likely to be scary to young children”, and because “this game allows the player to interact with other players online”.
http://www.pegi.info/en/index/global_id/505/?searchString=littlebigplanet+3&send=Search

The Games Rating Authority expands on its PEGI rating by describing that “non realistic looking violence”: “Enemies break apart and disappear in puffs of smoke when defeated.” “The violence is always unrealistic with flashing reactions.” As for what might scare young children, “The story revolves around nightmares and monsters that threaten the LBP world. The game features some scary levels, haunted mansion themes, spooky caverns, big clunky monsters”.
http://gamesratingauthority.org/pegi/search_aci.html

7. US – ESRB:
In the US, the ESRB rates LittleBigPlanet 3 as E for everyone, with content descriptors for Comic Mischief, Mild Cartoon Violence, and a Tobacco Reference.

The description gives some examples of the game’s “slapstick humor”, e.g. a “No Heavy Petting” sticker that features a one-ton cat, a “No Nudity” sticker that has “a sack figure covering its crotch”. The tobacco reference comes from a sticker that includes a “smoking pipe”.
http://www.esrb.org/ratings/synopsis.jsp?Certificate=33711

9. Themes:
The LittleBigPlanet games set typical platforming obstacles – like spikes and lava – in the way of Sackboy and his friends, so younger children may feel a sense of peril. However, the characters are made of cloth and if they “die” will just reappear slightly earlier in the level.

Because each of the characters has different abilities, themes of collaboration and difference are more prominent in this third game. Some of the puzzles may frustrate younger players, especially if they require precise timing, but that can be solved with help from a parent or older sibling.

LittleBigPlanet 3 encourages creativity in a range of ways, from collectable stickers that players can stick all over the place to the tools that let players make their own levels. Since children are instinctively creative, that range of options can encourage more ambitious creativity to the point where children are making their own games.

10. Why people play:
The LittleBigPlanet games are fun platformers, especially when played with friends, and LittleBigPlanet 3 adds to that with its new characters and their different abilities.

The handmade aesthetic of the game matches both the simple story of these four characters adventuring through the world and the theme of creativity, emphasised by the impressive array of creation tools that let players become creators as well as consumers.