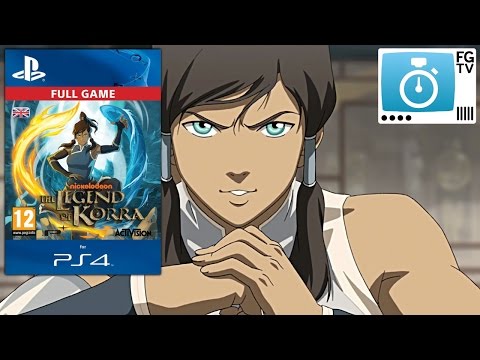 The Legend of Korra is a third-person beat ‘em up, where you control a character traveling through a fantasy world and fighting enemies. Based on the Legend of Korra television series, the sequel to Avatar: The Last Airbender, you fight with elemental power attacks themed around water, earth, fire, and air.

This game is set between seasons two and three of the television series. The heroine, Korra, finds herself without her bending abilities and sets about trying to get them back, fighting many enemies along the way.

Players attack by pressing combinations of buttons and switching between the different special “bending” abilities. This is simpler than other fighting games from the developer to match the younger audience.

The Legend of Korra was developed by Platinum Games, known for other critically acclaimed beat ‘em up games like Bayonetta and The Wonderful 101.

It might only take around six hours to complete The Legend of Korra, but as with other Platinum games players will likely want to replay on a harder difficulty to hone their skills. Players also unlock mini games after completing the game.

In the UK and Europe, PEGI rates The Legend of Korra as “suitable for persons aged 12 years and over only”, with a content descriptor for violence, specifically “non realistic looking violence towards human characters – violence causing minor injury only”.

The Games Rating Authority expands on its PEGI rating by explaining that “Martial arts style violence is frequent but mild with no blood or wounds. When hit, the characters flinch backwards and disappear when defeated. Enemies can also be kicked a long distance in an exaggerated way. There is a particular scene in which Korra gets shot with several long sticks, however no wounds or blood are visible and the scene cuts out before you see what effect these have on her.”

In the US, the ESRB rates The Legend of Korra T for Teen, with a content descriptor for Cartoon Violence. The description goes into detail on the combat and enemy types: “hand-to-hand combat against ninjas, human boss characters, and animal spirits (e.g., serpents, birds, lizard-like creatures). Players punch, kick, and use elemental attacks that hurl water, fire, earth, ice, and air at enemies. Some combat sequences depict close-up shots of heavy damage or slow-motion effects. Combat is also highlighted by cries of pain and loud impact sounds.”

Common Sense Media hasn’t yet reviewed the game, but rates the TV series as appropriate for those aged 8 and older, highlighting its “strong heroine” and “positive messages”, stating that the violence “involves the elements (fire, water, etc.) more than it does straight hand-to-hand martial arts-style exchanges; it shouldn’t be a problem for most kids thanks to that sense of fantasy”.

The story of Legend of Korra is based on fantasy and myth. Younger players may find some of the more fantastical enemies scary.

As with most licensed games, people will be drawn to The Legend of Korra if they’re already a fan of the television show. In this case, however, the legacy of Platinum Games will draw in fans of their other games. The combat is simpler than Bayonetta, so is better suited to younger players, but it’s still action rather than storytelling that is the main attraction.